When Nessa’s dad dies, the last thing she’s expecting is to lose everything else too. But when her hair suddenly turns electric red, and her estranged grandma turns up on her doorstep ready to haul her off to an isolated island, that’s exactly what happens. In one day, Nessa losses her mother and her friends, and learns that she’s a redheaded sea-witch with magical powers. She’s one of many Neptunians—magical beings blessed by the sea, including selkies, mermaids, pirates, and sea nymphs. Nessa doesn’t want to live on an island, she doesn’t want to be a sea-witch, and she certainly doesn’t want to be hunted by humans who harvest Neptunians for their magical powers. But if Nessa wants to live, she’ll have to accept her new life and everything that comes with it including a witty pirate named Caesar, who just might break her heart.

Challenges arise at home and at school. Nessa struggles with her lessons, her friendships, and her burgeoning romance. She has no idea who she is, where she belongs, or that the danger lurking in the shadows is about to tear apart her world all over again… 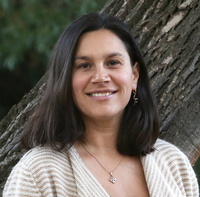 J. E. Hunter lives in Saskatoon, Saskatchewan, Canada, and began writing at a young age as an excuse to stay indoors during the cold winters. Several trips to the Pacific coast brought the inspiration for the Black Depths series. Tales of a Redheaded Sea-Witch, book 1, was published in 2014. Book 2, Broken Tide, was released in November 2015. Book 3 will be released in March 2016. J. E. Hunter has spent many years working in the field of environmental engineering and protection, a common theme in her works. When not reading, writing, or working, J. E. Hunter is often planning future adventures or busy living them.

Before, after, and while writing Tales of a Redheaded Sea-Witch, I came across a few mentions of sea-witches in common culture. Sea-witches are often lumped in with sirens, or mermaids (in fact, sirens and mermaids are sometimes referred to as one in the same), but in the Black Depths Universe, sea-witches, mermaids, and sirens are three very different beings.

Sea-witches are human women that have power over water. A sea-witch is completely useless at starting fires without at least a pack of matches for assistance (and likely also 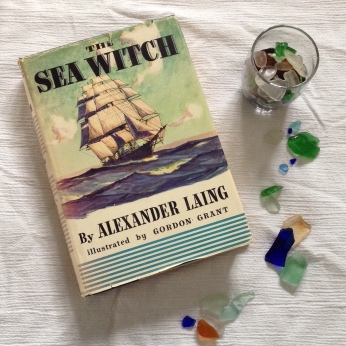 some fire starter and dry wood as well). Mermaids are half-human half-fish. Sirens are humans who can compel humans, but have no special power over water.

The first memory of a sea-witch for many might be Ursula in Disney’s, The Little Mermaid. Ursula isn’t a mermaid, but she is part octopus (an Octomaid, maybe?). Ursula lives underwater and is quite evil, and is therefore very different than Nessa, the human main character in my novel. Nessa isn’t evil, just a regular sixteen-year old who wants good friends, a boyfriend, and a normal life—and she definitely isn’t part octopus.

When I wrote Tales of a Redheaded Sea-Witch, I came across the following book at a second hand bookstore, called The White Cat Bookshop (which has since closed). At the time, I’d been thinking of calling my book, simply, Sea-Witch. But when I found the book pictured below, I decided I wanted a name that was a bit more unique, and hence the longer title, Tales of a Redhead Sea-Witch, was born.

The third, and in my opinion, most common reference to sea-witches that I found was this nineteen 50’s commercial for sea-witch hair dye. I honestly can’t remember when or how I found this, exactly, but I do remember I got a kick out of it. What do you think?

Subscribe to the author’s newsletter and three lucky winners will receive a copy of the book!

Last stop on the tour!