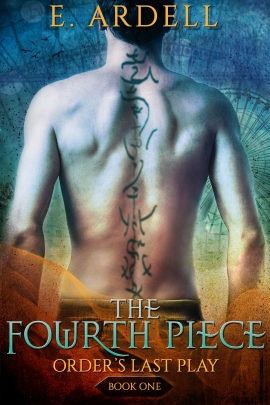 Life is great when you’re good-looking and popular…so long as no one knows you’re a vulatto. Being half-alien gets you labeled “loser” quicker than being a full vader. So it’s a good thing Devon, Lyle, and Lawrence can easily pass for human—until the night of the party. Nothing kills a good time faster than three brothers sharing a psychic vision of a fourth brother who’s off-world and going to die unless they do something. But when your brother’s emergency happens off-planet, calling 9-1-1 really isn’t an option.

In their attempt to save a brother they barely remember, Devon, Lyle and Lawrence expose themselves to mortal danger and inherit a destiny that killed the last four guys cursed with it. In 2022, there are humans and aliens, heroes and monsters, choices and prophecies—and four brothers with the power to choose what’s left when the gods decide they’re through playing games.

Book I in the Order’s Last Play series

The best science fiction reflects and parallels human culture and historical movements. A writer gets to enjoy flexing his or her creative muscles, while making a statement that some readers might not even notice.

Just so I’m not all talk, I’ll throw out examples of some current or popular science fiction literature that involve alien races and show parallels to our society. I’ll separate them according to tropes. (The trope order I list has nothing to do with any official ranking system. This is just the order I thought of them in.)

The first trope I want to talk about is: bodiless or parasitic aliens that hijack human bodies and consciousness and enslave them.
These aliens aren’t seeking to live in symbiosis; they want docile humans. They either like Earth how it is because it is compatible to their native environment, or they find that it is a suitable place to cultivate. They infiltrate our ranks slowly, seizing human vessels one at a time and taking over communities. They like to implant themselves into those in power as well as into the mundane.

Example books: The Host by Stephenie Meyer, The Fifth Wave by Rick Yancey, Animorphs by K.A. Applegate, and, for manga fans out there, Parasyte by Hitoshi Iwaaki. All of these popular works feature aliens that use humans as hosts.   Humanity as a whole is typically blind to what is happening until it is too late. Individuals that haven’t been invaded are scattered or gathered in small paranoid groups that are highly suspicious of outsiders, especially ones that want to introduce new ideas or who want to promote peace and understanding between themselves and the “others.” In others words, strangers who enter the group with ideas different from the norm. In this trope, there are usually key aliens who are sympathetic to man’s plight and wish to assist humanity and live in symbiosis if possible.

Real world connection: If we look at the United States in its current condition, this theme is about Muslims under fire in the United States because of a national fear of ISIS, it’s about racism, or about LGBT movements. People can read science fiction and easily distance themselves, believing that they are simply reading a fun adventure about aliens. It’s not real, I don’t have to contemplate any hidden meaning. However, on a deeper level, I think people who don’t generally read sci-fi but can enjoy The Fifth Wave and The Host, resonate with the universal theme of “Us versus Them.” Not saying that they agree with the ideal, but it makes the story more credible to them, because, to like a storyline, readers need to be able to relate in some way to the topic, regardless of their standpoints on any real-life movement or event. It is something that is actively happening.

The second trope: Alien races that love Earth, but can do without the cockroach (human) infestation.

In books like Ender’s Game by Orson Scott Card and Orphanage by Robert Buettner, the aliens seek to eradicate mankind so that they can cultivate the planet how they like. The human race unites to combat the outside invaders who are technologically and intellectually superior to us in every way.

Real life connection: Historically, we can liken this to the Allies against Axis. Peoples from different countries and cultures can unite against a common perceived enemy. The faction that opposes you and how you feel things should be, become the “aliens.”

It’s sad, but this theme shows that mankind seems to only unite in the face of threats to its norm. And, as seen at the conclusion of Ender’s Game (keep in mind I’m only talking about Ender’s Game as a title independent from the happenings in the rest of the series.), when that threat has been suitably dealt with, the world goes back to being separate nations with no more mutual understandings. In fact, the nations ended up almost immediately warring against each other, all trying to seize a war hero and become greater world powers. After World Wars I and II, though there are organizations like the UN, can we truly say it’s not still Us and Them when speaking about people from other nations?

Buettner’s Orphanage seems to solve the problem at the conclusion of Ender’s Game by not letting the alien threat ever truly vanish. Mankind has to stretch out into the stars and educate, still finding traces of “the slugs” (the enemy aliens) and entering combat. The military and training of soldiers all around the world is still needed, because the planet must always stand prepared for the return of the bad guys.

This is scary, because when we parallel this theme to human culture, it means we can only stay united and help one another under the threat of war. We must forever be paranoid. Is this true of human nature? Can the majority of us only temporarily put aside differences when it comes to survival? Perhaps it just means that as a species, we lack maturity. Which is demonstrated in the next popular trope…

Trope three: Aliens as advanced beings that wish to share their knowledge with us and include us in their planetary unions, because they want to help better us.
In works such as My Teacher is an Alien series by Bruce Coville and space operas like The Ruby Dynasty by Catherine Asaro, extraterrestrials reach out to Earth, building embassies or sending ambassadors. Their minds and technology are always superior and there’s usually a hint of condescension, but they generally mean well. Sometimes, humans are resistant, like in Coville’s series, the aliens try to enter our modern society and are met with extreme prejudice and opposition.

Real world connection: Some social groups would rather remain homogenous (which is ironic to say in places like the US) than to readily accept immigrants who bring with them not only a diverse look but strange cultures and dissimilar beliefs.

In the Ruby Dynasty Saga, the author takes us hundreds of years into the future to create a more advanced human society open to new ideas and diversity. Earthlings, because some of the “alien” races are simply humans very far removed from us, are the underdogs, but we are not ignorant when it comes to other races. We are instead ignorant to injustices done to other races and want to remain separate from wars not our own. We ignore firsthand accounts and examples of cruelty, not wanting to pick a side, because we enjoy our neutrality and wish to remain in the good graces of both sides for trading purposes.

Real world connection: This reflects what can be seen as perceived irresponsible inaction on the parts of first world countries when it comes to devastating conflicts elsewhere, such as the bloodshed between the Hutus and the Tutsi in Africa.

The fourth trope, and also the last trope I want to bring up, is: Aliens in hiding.

In works like I Am Number Four by Pittacus Lore and The Lux Series by Jennifer Armentrout, the characters are on the run from other alien groups that wish to kill or capture them. The beings in hiding either look human or can assume human form, and in some cases, depending on the audience, these human forms are extremely sexy. This gives the alien a “just like us” vibe. They befriend a human, or humans, who are willing to help them hide or fight, when the bad guys come to collect.

Real world connection: This trope reflects on everyday heroes, people who aren’t decorated soldiers or world leaders. They are the one or two people who are willing to stand up for others while endangering themselves in the process. They are Miep Gies who helped hide the Frank family from the Nazis, or the abolitionists who participated in the Underground Railroad, or the first grade teacher who hid her students from a gunman. They didn’t stand up for medals or acknowledgement, they just felt it was the right thing to do.

Hearing true stories like these gives humanity hope that even though terrible things are happening there are good people out there, and it tells you that you don’t have to be “special” to help someone. The human characters in this trope certainly don’t protect their alien companions out of a need to be great or to win an award. They’re simply being brave or decent. I feel that some readers want to relate to this theme and may internalize the message.

To summarize and conclude this over-long post, I do want to say that no matter the writer’s intentions when they write a work of science fiction, it typically contains a theme or themes that audiences recognize (consciously or unconsciously) about the society in which they live. Like people in ancient civilizations created mythology to explain the world around them, we create science fiction. I also think, to soften the blow or to make a work not so political, some writers may purposefully choose to use aliens and other worlds, so that readers can distance themselves from reality, but the underlying meaning is still there.

I will end this with something I’ve already said, but I truly believe it. The best science fiction is grounded by true events or issues and actively reflects and parallels human history. Aliens in fiction simply represent what is different from the norm, whether it be a person, an ideal, or a society as a whole, and how we may or may not react. That’s not so far-fetched and once that is explained, people who look surprised by others who write or enjoy reading science fiction may reinterpret their previous opinions.

Ardell spent her childhood in Houston, Texas, obsessed with anything science fiction, fantastic, paranormal or just plain weird. She loves to write stories that feature young people with extraordinary talents thrown into strange and dangerous situations. She took her obsession to the next level, earning a Master of Fine Arts from the University of Southern Maine where she specialized in young adult genre fiction. She’s a big kid at heart and loves her job as a teen librarian at Monterey Public Library in Monterey, California, where she voluntarily shuts herself in rooms with hungry hordes of teenagers and runs crazy after-school programs for them. When she’s not working, she’s reading, writing, running writers critique groups, trying to keep up with a blog, and even writing fan fiction as her guilty pleasure.

Don’t forget to visit the other bloggers on this tour!

One thought on “The Fourth Piece Promo + Guest Post”