Guest Review: The Last Apprentice: Revenge of the Witch

“How can you be lonely? You’ve got yourself, haven’t you? If you ever lose yourself, then you’ll really be lonely.” 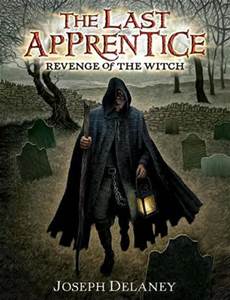 The Last Apprentice: Revenge of the Witch Review by: Claire Rankin
The Seventh Son swept into American  theaters February 6th, 2015 with a starring cast of Ben Barnes (Dorian Gray) and Jeff Bridges (Iron Man) the film did rather well. However, like most good films it was the child of an excellent book series.

English author Joseph Delaney has brought a wonderful cast of characters to life in his first installment, of many, in his The Wardstone Chronicles. Now, for our followers across the Atlantic, The Last Apprentice: Revenge of the Witch is also entitled The Spook’s Apprentice, in bookstores in the UK. Also the book is targeted via the age of the main character for younger audiences than novels we usually review but even for a college level it is a great read! Now let’s get down to some bare bones.

The Last Apprentice: Revenge of the Witch follows the experiences of young Tom Ward the 12 year-old seventh son of a seventh son. If the title wasn’t quite transparent enough he is the apprentice to John Gregory, the County Spook. As a Spook and a Spook’s apprentice, Mr. Gregory and Tom must send spirits tot he light  and fight all manner of bad nasties that dwell in the County not the least of which is the witch Mother Malkin a blood witch who, in her prime, would drink the blood of young women to keep herself youthful. Quite by accident Tom enables Mother Malkin to escape and she begins a tirade of dark magic focused mainly on Tom and Alice.

The cast of characters both of the dark and of the light includes Alice, girl with witch blood and pointy shoes, Tusk, Mother Malkin’s Satanic son, and Bony Lizzie, Alice’s aunt who is a witch and uses bone magic to bring herself power. Between the Boggart who guards Mr. Gregory’s home in Chippenden and the ghosts speaking to Tom the book lends itself to the fantastic. But the advertisement on the back cover is no exaggeration, if you are superstitious don’t read it a night.

All in all the story is entertainingly written and fabulously described. I would easily recommend it to any who wanted to try something spooky and fun. But as always we like to give you a versatile collection of opinions. So here they are;

“The story of Tom’s escape from the reincarnated witch’s hideous revenge is full of horrible details, as Alice helps, and then once again betrays him. This well-crafted novel marks an auspicious start for an exciting and fast series for young teens.” — Amazon Reviews.

“The protagonist’s voice is clear, and his conflicts over his actions ring true. This first entry in a proposed series is an excellent choice for readers who are looking for a more sophisticated alternative to R. L. Stine’s Goosebumps books (Scholastic), and the pacing and edgy illustrations at the start of each chapter will appeal to reluctant readers. Delaney’s rural, quasi-medieval world is populated by a variety of magic creatures, and readers will look forward to discovering more of them, along with Thomas, as the series continues.” — School Librarian.

Hope you all have enjoyed our look at The Last Apprentice or The Spook’s Apprentice. The book is available at Amazon, Barnes and Noble and other book stores near you! Happy Reading all! 🙂