Good morning everyone! I have a treat for the December gallery feature. This author touches upon subjects I’m truly passionate about, mythology and history, and her first book was a joy to read. I can’t wait for book two!

For those of you who don’t know, each month I will post a two part feature. The first part will be an interview with the month’s author and include a short bio. The second part of the feature is a sample of the writer’s work. Sounds awesome right?

Everyone give a big welcome to December’s writer. *claps* 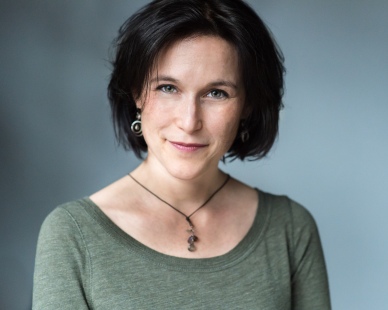 Jordanna’s obsession with mythology started at age six, when her parents handed her D’Aulaires’ Book of Greek Myths.  The stories combined everything wonderful about fairy tales—magic, adventure, and romance—with something much deeper: answers to the universe’s great mysteries.
After attending Harvard University, Jordanna moved to Manhattan. Despite its quintessial modernity, her new home inspired her to reach back to that early love of mythology to create the world of Olympus Bound, where Greek gods walk the city’s streets. Research for the series has taken her Italy, Greece, and Turkey looking for any and all references to Artemis, Apollo, and the rest of their immortal kin.  Her most recent trip involved a harrowing climb to the summit of Mount Olympus during a thunderstorm fit for Zeus himself.
When not working on the third book in the Olympus Bound series, she’s likely either tromping through Central Park, hiking the mountains of Maine, traveling the world, reading Star Wars novels, watching far too many movies, singing along (badly) to Broadway musicals, or playing Settlers of Catan.  She lives with her husband in an apartment on the Upper West Side of Manhattan, not far from where Selene DiSilva owns a much nicer brownstone.

Now onto the interview!

I read in your bio that in eighth grade you created, “a miniature set of cryogenically frozen Olympians.” Do you create any maps, charts, miniature sets to aid you in your research and writing?
My craft project for The Immortals mostly entailed figuring out a way to create an Olympian family tree that wasn’t horrendously confusing. It gets quite difficult when all of Zeus’s many children have different mothers—many of whom are Zeus’s own siblings. You can imagine the average family tree designs don’t account for quite that level of infidelity and incest. I wound up creating a circular design that appears in the front of the book to help readers keep all the relationships straight.

What do you think is the biggest challenge you face in writing a modern based series using mythological based history and characters?
My own penchant for accuracy often creates the biggest stumbling block. As someone with an academic background in history, I like to get my facts straight. Mythology presents two problems for the detail-oriented. First, there are so many different versions of the myths that there is no one true story. That has been a challenge but also a gift, since it leaves plenty of room for imagination. Second, the ancient stories often portray the gods in an extremely unflattering light—at least to our modern sensibilities.  It’s hard to feel sympathy for Artemis when she kills seven innocent young women because of their mother’s disrespect for the gods. So it’s been a constant challenge to keep Artemis/Selene true to her beginnings as a wrathful goddess while also keeping her human enough not to completely turn off readers.

Tell me about Theo Schultz and how he transitioned from an idea to a character fitting to be the hero of Olympus Bound.
Theo was both the easiest and hardest character to write. Easy because he is the most like me—talkative, curious, and not particularly physically adept. Hardest because the Theo who seems to flow most easily from my pen is a little too much like me. In first drafts, he tends to emerge as a nerdy weakling—not unlike myself.  I’m constantly working to make sure he is a strong enough partner for Selene. He can never compete with her in the kickass department, but I’ve made sure he’s always brave, smart, and funny nonetheless. At the same time, I’ve resisted making him too stereotypically “manly.” He is, at heart, an intellectual. He fights his battles with cunning and wit, not brawn.  I leave most of the kicking and punching to Selene.

It says in your bio, “a city that seems quintessentially modern yet harbors secrets and stories centuries old.” I feel this really touches on your series. What do you think is the greatest secret that modernity harbors in your novel that you want readers to understand?
In our own world, the Greek gods (as far as we know) aren’t actually wandering the streets of Manhattan. Yet I think their presence in The Immortals touches on a deeper truth: that we are all still looking for magic in the world. In the past, people believed that wondrous, unfathomable things were all around them. When a lightning storm struck, they knew Zeus was angry, and they cowered in fear. We just turn up the TV and drown out the thunder. I’m not saying we should go back to animism or a belief in the supernatural, but I do think we could use a little more awe in our lives. For me, that sense of wonder comes most easily in the natural world. I often think that antiquity had the right idea: If you imbue trees and mountains and stars with human names and stories and emotions, you pay more attention to them. You respect them. We could use more stories about angry rivers that rise up to punish their polluters, don’t you think?

How do you feel characters that are complete opposites, mainly a love interests, benefit a story?
Especially in the Olympus Bound series, where the protagonist is an immortal goddess, having a mortal love interest helps us connect to the story. The trick is to build the tension between opposites so that the reader is simultaneously convinced their relationship will never work and passionately believes they’re perfect together. If two characters are soul-mates from the beginning, there’s no challenge!

Did any character stand out to you at the end of The Immortals as a grounding character, one that assists readers in fully connect with the story?
Certainly, Theo Schultz often provides the mortal perspective on the gods. It’s through him that we see them as they are today. In addition, his best friend, Gabriela Jimenez, is one of my favorites. Since Theo’s a classicist, his perspective is still a bit warped. He gets Greek gods. Gabriela, on the other hand, is far more skeptical of Theo’s fancies. She brings him back down to earth, and he does the same for her. Their friendship feels very real to me; it provides a familiar, very human touchstone in a book otherwise full of the convoluted relationships between millennia-old immortals.

If you could change one thing that happened in any of the immortals’ pasts what would it be and why?
I wish Artemis had a few more myths about actually helping people. My Selene has a long history of trying to protect women, but most of the original Artemis myths are far more punitive.  The nicest thing she tends to do for young women is to turn them into constellations rather than allow them to suffer abuse. It’d be nice if she punished the rapist and let the woman live a long, happy life instead. But that just goes to show the ancient Greeks’ bias. They were far more interested in enforcing a strict patriarchy than in liberating women to live fulfilled lives.

Thank you Jordanna for the interview!

Stay tuned tomorrow for an excerpt of The Immortals, book one of the Olympus Bound series.

Enter to win a Booglie Adventure Swag Pack! Details and rules on the Itchy Pants book page.October 31, 2021
16 days to go.