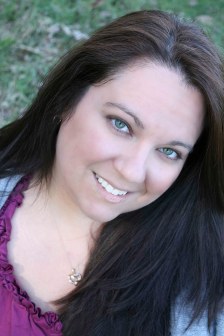 Kelly Metz is an author of urban fantasy, romance—both of the paranormal and contemporary persuasions—and whatever else strikes her fancy. Her lifelong goal is to raise miniature goats and write full-time while never getting out of her pajamas. With a day job in advertising, a husband, three stepchildren, live-in parents, and a menagerie of pets, writing provides much needed downtime and entertainment—though really all the above provide source material. How does she manage to do it all? Easy. Sleep is for wimps. Please send her virtual caffeine at http://www.kellymetz.com.

What do you primarily write?

“Mostly, I write romance. Some stories have a little romance, some have a lot, some are emotional, some are physical. Some are contemporary, some are paranormal. Most end happily, but some…not so much. However, they all center around a relationship, and the story is always about how that relationship defines the individuals.”

Where have you published?

“I have several stories in anthologies, the most recent a parody mashup called TV Gods, where we took our favorite television world, and threw in our favorite pantheon of gods. My story, The Lay of Pie, is a retelling of the Norse myth, The Lay of Thrym, featuring Thor and Loki, traveling across middle America in a ’67 Chevy Impala.”

Now onto the Interview!

When and why did you begin writing?

“I’ve been writing ever since I could hold a pencil. I’ve always enjoyed reading and creating stories. However, I didn’t begin seriously pursuing the craft until about seven years ago. I read a book—whose name I shall not disclosed—and wasn’t satisfied with the ending, and thought I could do better. So I sat down and wrote my first novel. Not quite so simply as that, as I’m sure all writers know. But I enjoyed the process, learned from my horrible attempt, joined writers groups, learned more, and kept going.

What books have most influenced your life most?

“During my “younger” years, it would be Anne Rice, Stephen King, and Dean Koontz. Interestingly, horror authors. But these guys taught me that monsters are interesting, and can be heroes. Recent books (or recent to me in some cases) would have to include the Dresden Files, for craftsmanship, character arcs, and the author’s ability to make each book better than the last (for a 15 book series and still going, that’s saying something); Harry Potter, for its various themes and storytelling; Outlander, for its focus on marriage rather than the newness of first love, as well as characterizations (seriously, if you don’t know James Alexander Malcolm Mackenzie Fraser, get to a bookstore); and Game of Thrones, for it’s complicated, interwoven plots that require a reader to think to piece backstory together, and the author’s lack of fear for killing of favorite characters because it makes sense for the story (I still miss you Ned, you foolish, honor-obsessed idiot.).”

Why did you choose to write in your particular field or genre? If you write more than one, how do you balance them?

“For me, genre comes from the story. It wasn’t really a choice. For a long time, I didn’t want to acknowledge that I was a romance writer, because at the time, I wasn’t interested in writing a story where the ending was guaranteed. See, to be a “romance,” the books must end happily. I enjoyed dragging the relationships over multiple plot lines, and so each story didn’t always end with the couple “together.” Technically, not romance. But my good friend Elizabeth Andrews smacked me over the head, and informed me I was a romance writer. As I mentioned earlier, I write about relationships and how they define the individuals. That really lends itself to the romance genre. But I also write paranormal and urban fantasy, because I love magic and alternative realities. The foundation of those plots? Relationships. Relationships, romance.

As for choosing the genre for the story, it’s more that the story chooses the genre. I have an idea; I write it; then I figure out where it goes. It’s the story that is important. Everything else is just marketing.

How do I balance writing more than one? Right now I’m not under any contracts so I write the story that is screaming loudest. Currently, it’s a paranormal romance. But my contemporary series is starting to shout, so as soon as I finish this draft, I’ll start on book two of the contemporary series.”

Any tips on how to get through the dreaded writer’s block?

“I’m not sure I believe in writer’s block. I’ve certainly sat at a keyboard and been unable to produce words. Sometimes my personal life is interfering with my ability to focus on the craft. Sometimes a shiny new idea is distracting me. Sometimes I’ve written my characters into a corner—I only half plot the story, and let it grow organically—and I need to figure out where I turned left instead of right. Sometimes I’m horribly bored with what I’m writing and need shelve the idea for a while.

Writer’s block, to me, feels more like an excuse, when to be called a writer, you need to do one thing: write. It doesn’t have to be Pulitzer prize worthy prose; it just has to be words from your heart and soul. Just sit down and write. BICHOK: but in chair, hands on keyboard. Find another writer and do word sprints. My local chapter of RWA does an incentive activity twice a year called 50/50: write a minimum of 50 words a day, for 50 days. 50 words are easy. It’s a paragraph.

Feel like you have writer’s block? Just write. Give yourself permission to ramble, to write badly, to write without purpose. That’s the beauty of editing; you can always fix it. You can’t fix a blank page.”

For your own reading, do you prefer ebooks or traditional paper/hard back books?

“I read both. My favorite authors are always automatic hardcover buys for my collection. But I also buy them digitally because I like the portability of my library, and the ability to highlight favorite passages without destroying my paper copy. New authors, I’ll generally buy digital. Plus I have a severe impulse control issue, and like the buy now read now feature of ebooks.”

What are your thoughts on good/bad reviews?

“Any review is a good review. No, scratch that, any review that invokes a strong response is a good review. Five stars, it’s the best you’ve read? Fantastic. I love it. One star, it’s the worst thing ever? I’m okay with that. You know why? Because you cared enough to write something, which means that the author succeeded. They moved you in some way, even if that way has a negative context. Good writing affects others. The reviews that bother me? The middle of the road ones, the ones that don’t have an opinion either way.”

What are you currently working on?

It’s a paranormal romance series. Remember that first book I wrote? Well, I’m taking that story idea, and splitting it over a series. I’m currently drafting book one, but planning for three to five novels, depending on what happens.

You can find Kelly at:

Blurb: Thanks to blindly following her ex-fiancé, 21-year-old Katie Bryant has nine months left in a town where the cows outnumber the residents. She knows no one except her new landlord. Will Savage is a player and the last man she should ever date, although he could be the perfect distraction while she counts the days until she graduates and goes home. A distraction she craves after her father’s unexpected death.

Though her mother is falling apart and her best friend sports a baby bump, whatever guilt and responsibility Katie feels is non-existent when she’s in Will’s bed. The best part is not having to sacrifice her plans for him. Come May, it’s over. Zero complications.

Make that lots of complications. Katie won’t lose herself in someone again, but her head and heart disagree about Will. As graduation nears, she must decide: take a risk on a reformed player or play it safe and leave him.

Will backs the truck into the drive, a short distance from the apartment door. Phoebe’s black nose appears briefly at the window, then vanishes as she scampers downstairs. The yaps begin just as we step onto the walkway, and by the time the key is in the door, elevate to levels of imminent explosion.

“I thought you said you had a dog,” he says eyeing the door.

I can’t argue. She does. The door is barely open before she bursts outside, looping around my ankles and barking at Will.

“That’s not a dog,” he tells me. “It’s a wind-up toy.” He looks into the apartment, then back down at the frantic pup. “Where’s the rest of it?”

Phoebe pauses her barking to snort. Then she prances over to his feet and promptly squats.

I choke on a laugh. “I don’t think she likes you.”

He frowns, so disconcerted, I have to fight not to laugh again. “Questionable, but I suppose none of them have expressed their opinions by peeing on you.” A wicked grin crosses his features, and he opens his mouth. I hold up both hands. “Don’t. I truly don’t ever want to know.”

I go inside and deposit my phone and keys on the kitchen counter. Phoebe charges ahead, stopping on the landing to turn around and bark frantically at Will, who is right behind me.

“So I don’t have—” I start, but the words die when I see what he’s doing. Will wipes away the glower directed at my dog and blinks innocently at me. “Right. Picking fights with animals the size of your shoe is very macho.”

“And yet you keep insisting on calling that thing a dog. I had an Irish wolfhound growing up. This—” He gestures to Phoebe, still barking. “—would have been a snack to King. Oophf.”

He catches the box I sling at him. “I really appreciate your help, Will.” Hands still on the box, I lean forward, adding my not insubstantial weight. His biceps strain against the fabric of his shirt and there’s a smile in his eyes. “But if you keep making fun of my dog, you will be late for work.”

“Oh?” His hair hangs forward, sleek with a slight wave.

“Yes, because I will brain you with my baseball bat, dump you in the closet, and take your truck keys.”

“I don’t threaten. I promise.”

He leans close, our heads almost touching. A beam of sun dances in his eyes, adding a spark of mischief to their blue depths. His breath smells faintly of mint. “No one drives my truck but me.”

“Then leave my dog alone.”

Recognizing the quote, I burst out laughing, backing up and covering my mouth.

He grins. “Get a move on, Kitten. You’re cutting into my prep time.”

I almost correct the name again, but decide it’s the satisfaction of irritating me that keeps him using it. No irritation, no stupid nickname.

The remaining boxes fit into the back of his truck. What would have taken me all night, we’re accomplishing with one trip. I don’t know if I should be happy it won’t drag out, or feel pathetic because my entire life fits in the bed of Will’s pickup truck.

Dosed with aspirin, I finish a last run through of the apartment, making sure I didn’t miss anything. I come down the stairs holding Phoebe’s leash, the tiny monster trailing after me like a lost lamb, and find Will waiting for me in the kitchen.

With Jeremy. My ex.