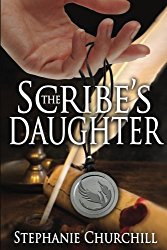 “Depth and dimension of a thing was proved out by time, touch and exploration, by revelations that gave lie to the deceptions that the surface sought to make real.”

Meet Kassia, a teen stricken by poverty and forced to be a thief to keep her and her sister alive. Orphaned, bitter, and constantly struggling, everything changes when a rich stranger demands of her a job she doesn’t know how to do. The payment is amazing but what is the real cost?
The Scribe’s Daughter resonated with me more than usual. I love being able to connect with a book and lately I’ve had mixed success rates.
With Churchill’s story I was transported to a place where I could see myself lost in a world very much like ours with two options – who I want to be and who I am expected to be. The novel plays off of economic status and family standing/lineage but aims to prove that we aren’t defined by how much we own or who are parents are. The reality of something can be changed. Granted some situations put us in a hard spot – especially for Kassia throughout the novel because she was so unsure of herself and her situation as it unravels. I liked the complete progression of Kassia as she grew to test the waters and come to accept that the choice is hers and she is worthy to make her own choices. She survived and moved on.
My only critique of the novel, I was entranced by the character development and its relation to where I am at on a personal level, was the flow. Sometimes I felt something was too borderline cliched and I also got a little lost in sentence / scene translations.
Overall, Churchill did a great job bringing The Scribe’s Daughter to completion. Here is the sequel and the journey that is set to continue. Stay strong Kassia.

Stephanie also did a guest post on strong heroines, check it out here.

Thanks Stephanie for sharing The Scribe’s Daughter with me!

One thought on “Review of The Scribe’s Daughter”