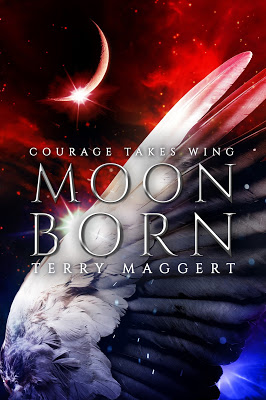 Livvy Foster has a new heart, home, and a place in the powerful halls of House Windhook. The fall of Sliver was only the beginning of a civil war that sees angels from across the sky challenge each other to lead a world in which the past and the future are connected by a storm crafted from time, ambition, and power.When House Selinus attempts to bend the light of days in order to become the supreme power in an apocalyptic future, they confront a goddess who is older than time itself– and she’ll stop at nothing to get the one soul who escaped her deadly grasp: Livvy.With deceit, war and love swirling in the clouds above a shattered world that was once Livvy’s home, she’ll be asked to do something a girl with a broken heart never thought possible.Fight for Windhook. Fight for her world.Take wing with Livvy, one heartbeat at a time.

Buy Moonborn
on Amazon!
(Free on Kindle Unlimited)
Book One: 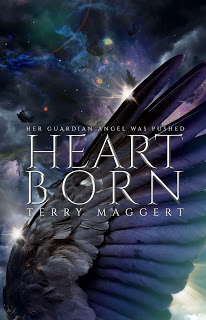 Her guardian angel was pushed.Keiron was never meant to be anything other than a hero. Born high above in a place of war and deception, he is Heartborn, a being of purity and goodness in a place where violence and deceit are just around every corner.His disappearance will spark a war he cannot see, for Keiron has pierced the light of days to save a girl he has never met, for reasons he cannot understand. Livvy Foster is seventeen, brave, and broken. With half a heart, she bears the scars of a lifetime of pain and little hope of survival.Until Keiron arrives.In the middle of a brewing war and Livvy’s failing heart, Keiron will risk everything for Livvy, because a Heartborn’s life can only end in one way: Sacrifice.Fall with Livvy and Keiron as they seek the truth about her heart, and his power, and what it means to love someone who will give their very life to save you.

Buy Heartborn
on Amazon!
(FREE on Kindle Unlimited)
Excerpt
Green. That was the first sign that Keiron was somewhere and somewhen else. The drab grays of home
were gone, replaced by a vibrant, lush promise of springtime. Everything in his
vision was on the cusp of exploding into action as the days grew longer,
warmer, and alive. With exaggerated delicacy, he moved his head slowly, like it
was full of water because the fall had been long and his push backward into the
light of days left him sore and muzzy. Whatever he’d expected, it hadn’t been a
body filled with dull aches and the promise of bruises to come.
“Maybe I’ll just sit
here until my head is clear.” The wind freshened with a promise of rain,
squelching the idea of inactivity. In stages, he dragged himself painfully
upright, wondering for the first time why he hadn’t merely glided all the way
to his landing. As he rose, his arms began to pinwheel in a wild gyration,
ending only when he pitched face forward into the moist grass with an inelegant
thud.
The only time he’d
ever fallen in his entire life had been when he was a child, before he learned
how to open—
His wings were gone.
A searing jolt of fear raged through him, spiking into every corner of his body
and ending in the most delicate place it could.
His mind.
He shook, breath
coming in ragged gasps while reaching desperately over each shoulder to find
nothing but empty air. He was stripped, defenseless, and maimed.
He was broken. He was
ordinary.
And ordinary was not
good enough to save her.
Only twice in his
life had stories of the wingless come to him; in each case, the piteous
creature had been a criminal who the council banished for a shadowy reason so
heinous it was kept from the children. But this—his hands waved in a weak
rhythm as if they too could not believe his condition. He was, what, exactly?
Wingless? No, that could not be, as he’d committed no crime. Garrick, his
brother and apparent rival, had pushed him from House Windhook. Keiron’s
thoughts and intentions were far from criminal, and could be no reason for
banishment, let alone stealing his wings.
Still, he sat, pained
with the understanding that this was truly a one-way trip. His cause had gone
from noble to permanent, and he knew that the vistas of House Windhook were now
little more than a memory.
He would save her or
die. It was simple as that. 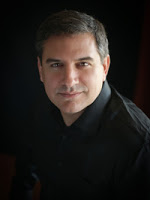 About the Author
Left-handed. Father of an apparent nudist. Husband to a half-Norwegian. Herder of cats and dogs. Lover of pie. I write books. I’ve had an unhealthy fascination with dragons since the age of– well, for a while. Native Floridian. Current Tennessean. Location subject to change based on insurrection, upheaval, or availability of coffee. Nine books and counting, with no end in sight. You’ve been warned.
Author Links: