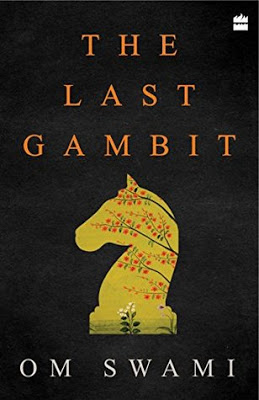 Success by design is infinitely better than a win by chance. Vasu Bhatt is fourteen years old when a mysterious old man spots him at a chess tournament and offers to coach him, on two simple but strange conditions: he would not accompany his student to tournaments, and there was to be no digging into his past. Initially resentful, Vasu begins to gradually understand his master’s mettle.

Over eight years, master and student come to love and respect each other, but the two conditions remain unbroken – until Vasu confronts and provokes the old man. Meanwhile, their hard work and strategy pay off: Vasu qualifies for the world chess championship. But can he make it all the way without his master by his side?

Inspiring, moving and mercurial, The Last Gambit is a beautiful coming of age tale in a uniquely Indian context.

Add to Goodreads
Buy on Amazon!

‘You are a genius, Vasu,’ he said. ‘I’m investing all my time in you because I know some day you’ll surprise everyone, including yourself.’ My chest swelled with pride. ‘And that day is not far,’ he added. I felt as if I had won the world championship. He thinks I’m a genius! I couldn’t contain my smile and adjusted myself in my couch. ‘But,’ he said, gently bringing me down a notch, ‘you are not consistent. You do play some brilliant moves, but they don’t add up.’ As always, he had a nugget of wisdom. ‘Every move, Vasu, every move must put greater pressure on your opponent. To win, you must play good moves and do so consistently.’ ‘The same goes in life too,’ he continued. ‘A consistent and persistent man of average intelligence is more likely to succeed than an erratic and lazy genius. A hundred well played draws, or a hundred lost but well-fought games are better than one victory by fluke. Success by design is infinitely better than a win by chance.’
Success by design is infinitely better than a win by chance – this got etched in my mind. This was it. The missing link. I had been playing in the hope that success would come, that it would just happen. It dawned on me that success was a sculpture that I had to carve and chisel at patiently. I had to design my success.

Om Swami is a monk who lives in a remote place in the Himalayan foothills. He has a bachelor degree in business and an MBA from Sydney, Australia. Swami served in executive roles in large corporations around the world. He founded and led a profitable software company with offices in San Francisco, New York, Toronto, London, Sydney and India.

Om Swami completely renounced his business interests to pursue a more spiritual life. He is the bestselling author of Kundalini: An Untold Story, A Fistful of Love and If Truth Be Told: A Monk’s Memoir.

His blog omswami.com is read by millions all over the world.

One response to “The Last Gambit Tour + Excerpt”