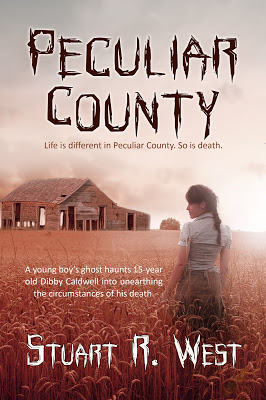 
Summary:
Growing up in Peculiar County, Kansas, is a mighty…well, peculiar experience. In 1965, things get even stranger for Dibby Caldwell, the mortician’s fifteen year old daughter. A young boy’s ghost haunts Dibby into unearthing the circumstances of his death.

Nobody—living or dead—wants her to succeed. James, the new mop-topped, bad boy at school doesn’t help. Dibby can’t get him out of her head, even though she doesn’t trust him. No, sir, there’s nothing much more peculiar than life in Peculiar County…except maybe death in Peculiar County.

EXCERPT:
I pushed through the doors. They swat at my backside, squeaking with mischief. Eee-hee, eee-hee…
Down in the workshop, the cold really packed a wallop. I rubbed my arms, stamped my feet. I rode my hand along the wall, searching for the light switch.
Tik…tek…tik…
Fluorescent ceiling lamps sprung to life, duller, deader than usual. Instead of providing warm luminescence, they cast everything in an odd light, everything touched in artificial tints.
Immediately, the strong, familiar odor of ammonia enveloped me. But I couldn’t place the other smell, couldn’t describe it. If pressed, I suppose I’d catalog it somewhere between sweet and metallic. Sorta the way blood tastes when you prick your finger and suck on it. I’d never smelled anything like it before, not in Dad’s workshop or elsewhere.
An overriding smell rode in like fog. A strong, wrong odor that brought to mind mold and rot. A primal scent from a different time or place.
Ching! Ding! Ting-a-ling!
Impatient as a hungry baby, the bell-ringer called.
Click.
The walk-in refrigerator door handle swung up.
Chumpf!
The door released its seal and opened, just a few inches. A pale blue—hardly blue, more like moon-white—cone of light fell across the floor. A swirl of frost slivered out, twirled in the bare luminescence.
Ding! Ding! Ching! Ting-a-ling-aling—
Cut off in mid-ring, the bell silenced. Everything hushed. No sound, not a peep, a tick, a drop. Just the silent shroud of death.
Slowly, I crept toward the refrigerator. Which didn’t make a lick of sense as I knew Hettie waited for me. There didn’t seem to be any real sense in maintaining silence either. But any noise—even my own—made me want to scream.
Above me, the light flickered off, on, then sizzled like bacon before settling on dark.
My hand gripped the handle. Arctic cold, I wrenched my hand back. I flagged it ‘till the stabbing needles of cold left. With my shoulder, I nudged the door. It pushed open half-way, then stopped. I followed with a mighty mule kick.
The door opened about as far as its hinges would allow.
I took a deep breath, held it. When I exhaled, I spouted out a frozen, visible vapor.
“Hettie?” I whispered.
I entered. To the left, the metal shelves on the wall were unoccupied. On the opposite side, all but one sat empty. A rumpled plastic cloth lay across the bottom shelf.
The eerie blue light had no visible source, but it provided ample light to see by. Maybe too much, considering.
“Hettie?” I repeated a little louder.
In the back of the unit, where Dad housed his supplies, a hanging shower curtain billowed out. Plastic crinkled. Something moved, fluid behind the curtain’s rippling waves. Not exactly flesh-colored, not much of anything.
Tinggg!
My heart urged me to turn back. Traitorous feet wouldn’t comply.
White snails of fingers crawled around the plastic and gripped it. Slowly, the curtain pulled back. Rusty rings on a rustier rod squealed screeeeeee.
Hettie stood exposed, naked. Except for the black “X” stitching up her innards. Varicose veins twined her legs. Toes exploded into corns the size of thumbs. Her scrubbing pad of hair stood up on end, a static raised brush of black and white.
Clouds had moved into her eyes, milkier than when I’d found her, yet intently focused on me. She showed that awful cavernous smile again. Barnacle-like teeth jabbed out of her gums.
Her lower jaw wobbled, then dropped ajar. Not an involuntary movement caused by gas either, the way sometimes happened to corpses. She gasped, a hissing radiator.
She took a doddering step toward me.
Ding!
The bell tied to her toe tolled.
Ding-a-ling!
Each step forward took great effort. A kind of ghostly arthritis hampered her dead limbs, encased them in cement. When she moved, wood cracked. More wood splintered, her body falling apart. She raised an arm. Dark veins spiraled around it, swimming upstream with determination. They rode toward her sagging bosom, traveled north up her neck, snaked beneath her chin, and set up house on her face.

And still she kept coming.

About the Author
Stuart R. West is a lifelong resident of Kansas, which he considers both a curse and a blessing. It’s a curse because…well, it’s Kansas. But it’s great because…well, it’s Kansas. Lots of cool, strange and creepy things happen in the Midwest, and Stuart takes advantage of them in his work. Call it “Kansas Noir.” Stuart writes thrillers and mysteries usually tinged with humor, both for adult and young adult audiences.
Stuart spent 25 years in the corporate sector and now writes full time. He’s married to a professor of pharmacy (who greatly appreciates the fact he cooks dinner for her every night) and has a 25 year old daughter who’s dabbling in the nefarious world of banking.