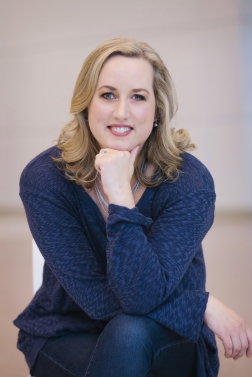 Adrianne Finlay received her PhD in literature and creative writing from Binghamton University. Originally from Ithaca, New York, she now lives in Cedar Falls, Iowa with her husband, the poet J. D. Schraffenberger, and their two young daughters. She is an associate professor of English and the Program Director of Creative Writing at Upper Iowa University in Fayette, Iowa. When she’s not writing, reading, or grading, she’s making soap to sell locally, raising money for type 1 diabetes research.

The world of Your One & Only is in some ways very low-tech. It’s a walled-in world surrounded by wilderness and jungle, while the inside is agrarian and peaceful. I think what it means to be human, in this or any world, is to do those things that only humans do. Humans are the only animals on the planet that are able to imagine and create art, and I think this is what touches on something uniquely human. Eating, sleeping, playing—all animals do these things. It’s our imaginations that help us understanding the past and the future, our mortality, and our compassion, that allows us to tell stories about who we are through art.

“There is nothing more human than love.” Did you worry at all about writing YA romance and tacking the stigmas that romance novels in general face?

I don’t know if I worried about dodging stigmas and tropes, but I was aware of them as I was writing. And while romance is an integral part of the story, I knew I didn’t want the romance to be the driving force of the story. Rather, I wanted the story to drive the romance. Jack and Althea’s relationship is important unto itself, but more crucially, their relationship is a way to explore the various ideas within the world of the book. Because Jack is the only human in the world, and Althea is a clone, their relationship becomes a template through which to confront the various challenges and assumptions about what it means to be human, and what it means to love as a human.

Yes, the original story did change! The origin of Your One & Only is that I read an essay about the ethical implications of cloning a neanderthal, and this made me think about what would happen if, in a future world where humanity had changed in some fundamental way, if a present-day human was cloned. An early draft of the book included cloned Neanderthals who had been created by the clones as laborers. It was probably in the first or second draft that I edited them out, and I’m pretty sure it was the right choice!

The hardest concept to write was probably imagining the story from the perspective of Althea-310. I hope readers feels connected to her, but I also want the reader to see and understand the clone world through her eyes, and that world should feel foreign and alien in some ways, so balancing those two things was always on my mind. I pretty happy with how it turned out. It helps that Althea-310 is in the process of challenging and questioning the world she’s always known, slowly becoming more human as she goes.

Jack’s imperfections are those things that make him different from the clones. The clones have perfected their genes, and as a result they have no illness, disease, or genetic imperfection, so I knew I wanted my main character, the only original human in the world, to have something that made him different from them, something that made him not “perfect.” Jack has asthma, so the clones consider him flawed, and Jack sees himself as flawed as well because he’s grown up with the clones and for generations they’ve defined what it means to be “perfect.” Jack comes to realize, however, that those things that make him different allow him a unique perspective on the world in which he lives, and that if he were cleansed of all his imperfections, he would lose his humanity, as the clones have.

Thanks so much for hosting me on A New Look On Books! Be sure to preorder your copy of Your One & Only, which is out February 6, 2018. I wrote it thinking about the kinds of books I’ve loved to read, so I hope you enjoy reading it as much as I enjoyed writing it!