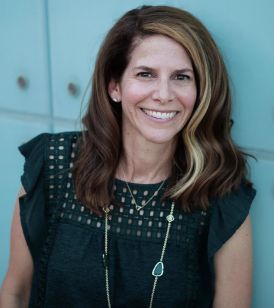 A devotee of reading and writing from a very young age, Amy Trueblood grew up surrounded by books. As the youngest of five children, she spent most of her time trying to find a quiet place to curl up with her favorite stories. After stints working in entertainment and advertising, she began writing her first manuscript and never looked back. Her debut novel, NOTHING BUT SKY will be published March 27, 2018 by Flux.

Congrats on your debut novel, Nothing But Sky, releasing next year! What was your inspiration behind the creation of daredevil Grace Lafferty?

In the early 1920s there were many pilots who took to the skies in war surplus planes. Most of the time men received most of the notoriety. If you look closer at this time period though, you’ll discover many women were also part of this “Barnstorming” era. I wanted to bring these women’s stories to light via my fictional character, Grace.

Did you run into any surprising roadblocks while writing Nothing But Sky?

When you choose to writer historical fiction there can be many roadblocks. I think the biggest one was making sure everything was period authentic. Just when I would get into the groove of writing a scene, I would come across a word or a situation and I would have to stop and research it to make sure it was accurate for the time period. For example, there was a scene where I wanted to use the word “pizazz”, but as I discovered via research that word was not readily used until the late 1930s so I had to find another word.

There are so many undiscovered stories about amazing women in history and the female wing walker during the “Barnstorming” era was one I wanted to explore. These women risked their lives on a daily basis and I wanted to call attention to their skill and bravery.

Actually no, but it did affect my interest in writing fiction. In journalism, there is no gray area. When you write a newspaper article everything is black and white—as it should be. But if you have a creative mind, your prose tends to wander in a different direction and that was something I wanted to explore.

My journalism degree usually rears its head during the drafting process as I tend to write very thin first drafts. I pay for this during the revision process as I usually have to add more setting details, as well as additional visual and sensory cues. A first draft for me may hover around 55,000 words, but by the time I’m done with a manuscript it usually ends up around 80,000 words.

I’m thrilled that YA historical is slowly but surely gaining a foothold in young adult literature. I hope this book will not be seen as purely a historical work, but as a universal story of a girl chasing after her dream. It’s the reason why I wrote this as part of my dedication: “And for little girls everywhere…no matter what people say, never be afraid to chase your dreams.”

Thank you for the opportunity to tell you a little more about Grace and NOTHING BUT SKY. I hope your readers will pick up the book and enjoy her journey.

Thank you Amy for stopping by A New Look On Books and Happy Book Birthday!

Nothing But Sky is out today!

Enter to win a Booglie Adventure Swag Pack! Details and rules on the Itchy Pants book page.October 31, 2021
10 days to go.