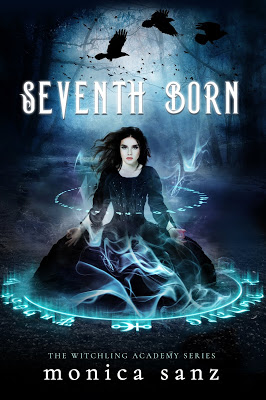 Seventh Bornby Monica SanzGenre: YA Paranormal/Mystery & SuspenseRelease Date: September 4th 2018Entangled TeenSummary:Abomination. Curse. Murderer. All names hurled at eighteen-year-old Seraphina Dovetail. As the seventh-born daughter to a witch, she’s the cause of her mother losing her powers and, in turn, her life.Abandoned as a child, Sera dreams of becoming an inspector and finding her family. To do that, she must be referred into the Advanced Studies Program at the Aetherium’s Witchling Academy. Her birth order, quick temper, and tendency to set things on fire, however, have left her an outcast with failing marks…and just what Professor Nikolai Barrington is looking for.The tall, brooding, yet exceedingly handsome young professor makes her a proposition: become his assistant and he’ll give her the referral she needs. Sera is quickly thrust into a world where witches are being kidnapped, bodies are raised from the dead, and someone is burning seventhborns alive. As Sera and Barrington grow ever closer, she’ll discover that some secrets are best left buried…and fire isn’t the only thing that makes a witch burn.

Pre-Order links can be found HERE!

Purchase links can be found HERE

The origin of a witchling.

The origin of witchling happened back in 2013. I was almost done drafting my book Finvarra’s Circus when I came across a picture of a girl with her eyes downcast. Though she radiated immense strength and rebelliousness, something struck me about her posture and why she looked down as if having just been reprimanded. Sera’s character immediately popped into my head and the first thing I knew without a doubt was she was not one to cower to anything, which made the picture even more intriguing.

I remember sitting with the picture when this wave of ideas washed over me, which turned out to be Sera’s history and place within the book’s society. In her world, she’s considered an abomination and a murderer for simply being the seventh born daughter to a witch, which in turn leads to the mother losing her powers and her life. I found this concept so fascinating as I’d always been drawn to the seventh of a seventh folklore, but the tales were typically about boys and their experience as seventhborns a positive one. Seventh born girls are not allowed to practice magic because of societal fears about seventhborns, but ultimately Sera is allowed to join a program where she will learn magic. This is when the word witchling attached itself to the story as Sera is both young in age and young in magic practice.

As I started writing and more pieces came together, Sera’s fiery temper made its appearance. She has a very short fuse, and it typically results in her blowing something up or setting something on fire. In working with Professor Barrington, she learns to channel this anger into something useful, in turn growing her magic and moving closer to being a witch. I loved this aspect of the story because it highlighted how Sera had a lot to learn not only about magic, but life itself, highlighting her position as a witchling all the more.

The book as a whole is a coming of age story, which heavily reinforces the witchling theme for Sera. The original title was actually A Witchling’s Rites since the story is about things that Sera had to experience in order to grow—her rite of passage into adulthood and witchhood. Once it changed to SEVENTH BORN, the word witchling became a part of the series title which I’m ecstatic since I know for Sera, being a witchling is a motivation for her to keep growing and learning until the day she masters magic and can wear the label of witch with pride.

Monica Sanz has been writing from the moment she could string together a sentence. Her stories have come a long way from mysterious portals opening in the school cafeteria, transporting classmates to distant worlds. A classic by the name Wuthering Heights is responsible for that. She’s been lost to dark romances and brooding fictional men ever sense. Now she writes about grumpy professors, cursed ringmaster, tortured soul collectors, and the girls they fall in love with. Monica’s books have received many accolades on the social writing website Wattpad. She’s accumulated over six million reads, eighty thousand votes, and fifteen thousand comments since posting her books on the website. She is also a member of the Wattpad4, a group of writers who host weekly Twitter chats on the subjects of writing and publishing.