Love Spellby Mia KerickGenre: YA Contemporary Fiction (LGBTQ)Re-Release Date: August 2018Summary:Having come to terms with being gay, Chance César is still uneasy with his gender identity, or, as he phrases it, “being stuck in the gray area between girl and boy.” This concern, however, doesn’t stop him from strutting his fabulous stuff on the catwalk in black patent leather pumps and a snug-in-all-the-right (wrong)-places orange tuxedo as the winner of this year’s Miss (ter) Harvest Moon Festival at the local Beans and Greens Farm’s annual fall celebration, serenaded by the enthusiastic catcalls of his BFF, Emily Benson. Although he refuses to visually fade into the background of his rural New Hampshire town, Chance is socially invisible—except when being tormented or beat up by familiar bullies. But when Chance, the Harvest Moon Festival’s mockingly-elected Pumpkin Pageant Queen, meets Jasper Donahue (Jazz), the legitimate winner of the Pumpkin Carving King contest, sparks fly. Chance wants to be noticed and admired and romantically embraced by Jazz, in all of his neon orange-haired glory.And so at a sleepover, Chance and Emily conduct intense research on their laptop computers, and come up with an article in an online women’s magazine called “Ten Scientifically Proven Ways to Make a Man Fall in Love with You.” Along with a bonus love spell thrown in for good measure, it becomes the basis of their strategy to capture Jazz’s heart.Quirky, comical, definitely “sickening” (this is a good thing), and with an inner core of poignancy, Love Spell celebrates the diversity of a gender-fluid teen. 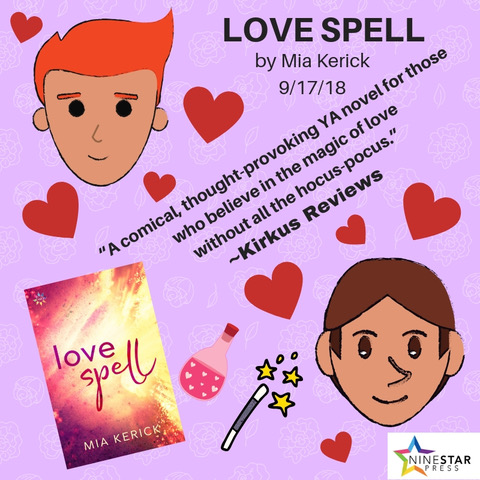 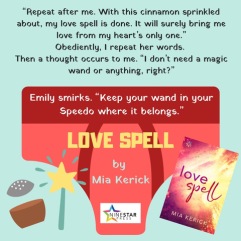 Mia Kerick is the mother of four exceptional children—a daughter in law school, another a professional dancer, a third studying at Mia’s alma mater, Boston College, and her lone son off to Syracuse. She writes LGBTQ romance when not editing National Honor Society essays, offering opinions on college and law school applications, helping to create dance bios, and reviewing English papers. Her husband of twenty-four years has been told by many that he has the patience of Job, but don’t ask Mia about this, as it is a sensitive subject.

Mia focuses her stories on emotional growth in turbulent relationships. As she has a great affinity for the tortured hero, there is, at minimum, one in each book. As a teen, Mia filled spiral-bound notebooks with tales of said tortured heroes (most of whom happened to strongly resemble lead vocalists of 1980s big-hair bands) and stuffed them under her mattress for safekeeping. She is thankful to her wonderful publishers for providing alternate places to stash her stories.

Mia is a Progressive, a little bit too obsessed by politics, and cheers for each and every victory in the name of human rights. Her only major regret: never having taken typing or computer class in school, destining her to a life consumed with two-fingered pecking and constant prayer to the Gods of Technology.

Contact Mia at miakerick@gmail.com. Visit her at www.miakerickYA.com for updates on what is going on in Mia’s world, rants, music, parties, and pictures, and maybe even a little bit of inspiration. 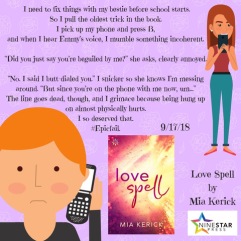 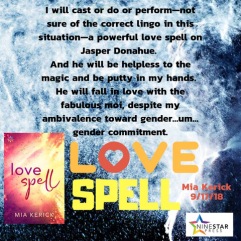