***Disclaimer: I received a copy of this book in exchange for a free, honest review. All opinions are my own.*** 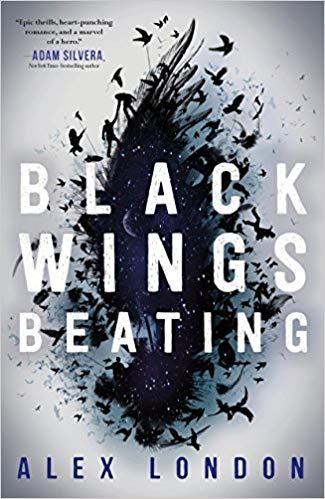 “In war, a lot of people had to do things they didn’t like. And this war was only just beginning.” – Alex London, Black Wings Beating

This book has me… SHOOK. I’ve been staring at a blank screen for a good 20 minutes trying to convey what I’m feeling. I feel raw, exposed, and grim. I’ll start with a warning that Black Wings Beating isn’t a tale of happiness, or hope, but of a darker look at human nature and the foundations of our instincts based upon survival. There is hope buried in the tale, along with redemption, and there is even love, but it is hidden and teased at but never quite given. It was all a game, a game of chance, luck, stupidity, and ultimately only some would succeed.

I wanted to dislike Black Wings Beating. I wanted to stop reading and hide from what it was telling me because I wasn’t prepared for the emotional hit. I wasn’t prepared for the death, the beatings, the brutality, and overall the ugliness of human nature. I had been content to read the prose, skim over the evil, and continue in ignorance. Yet only a few pages in I knew I wouldn’t be able to walk away. London does a fantastic job with sentence structure, teasing the reader with wanting more, and packing a punch that leaves you breathless. Line after line stuck with me whether it was grizzly or not. It was a love hate with words and a reminder of how a book can be a wakeup call for the imagination. Some sentences may have been too much of a run-on and some maybe weren’t needed, but the descriptions of scenery and feelings were very well defined. The characters more so. I felt like I was living in this book alongside of Kylee and Brysen. I laughed, cried, and hated throughout until the bitter cliff hanging end.

I’m digressing here and want to go back to give a brief summary of the novel. Black Wings Beating takes you on a journey with twins Kylee and Brysen. Both are struggling with their own insecurities and memories, both want freedom in their own way, and both realize they have lost the connection with each other but can’t quite figure out how to fix the problem. When Brysen’s boyfriend – I use this term loosely because this love interest was NOT okay with me – is used as bait for the twins to capture a nearly mythical bird, the ghost eagle, Brysen is reckless in his decision to bargain for time and even promises to get the bird to rescue his love and become the hero of his own story. Kylee can’t let her brother do this alone, knowing he wouldn’t survive and think to plan ahead for complications, and follows him. I’m still not sure how I feel about the motives of these characters. But let’s just say a lot of characters enter the game and stories are blended together seamlessly. Don’t trust anyone though. EVERYONE has their own motive.

In terms of characters, woah. Brysen is the definition of “damaged.” I never quite could pinpoint him or his actions. Part of me feared he was stereotypical in his decisions and rashness and another part of me knew exactly where his emotions were coming from and wanted to cry at his self-hate. Each reveal of a layer of himself was like a band aid being ripped off. He wanted to be a hero and I hope he still has the chance. Then there was his twin Kylee who really tormented me as I tried to connect with her. Everything she does is for her brother as she tries to elevate guilt for not helping him when they were children. She is protective, arrogant, and comes off as standoffish. I still don’t know how I feel about her even when more of her emotions were revealed toward the end. I wanted to like her, really. The father of the twins… let’s avoid him for fear of me ranting. Which means I have to avoid the twin’s mother, Brysen’s NOT OKAY boyfriend, and about a dozen other characters who evoke just too many emotions to put into words or let me wondering at their contributions to the story. They are complex – most of them – and ugly and beautiful all in one. Shout out to Vyvian, Jowyn, and the Crawling Priests because regardless of their parts in this story they were very rich in character and I cannot wait to see more of Jowyn and Vyvian later on. I also hope to redeem best friend Nyall in my eyes. I had another case of wanting to like him but falling flat with his only motivation to get Kylee to love him. He was more lovesick pup than boyfriend material.

As I try to rein in this review, I’m reflecting on Black Wings Beating and knowing I will have to reread the novel. It was thick with emotion and complexity and richness of depth. I still cringe at the beatings and the bloodthirsty-ness of this novel both on and below the surface of the tale. I wasn’t ready for it. Either way, London has certainly written a debut that will haunt me for a long time. I also need to read up on falconry – pronto.

Check out my interview here with Alex London to celebrate his debut’s release.