The Lit Coven is an adults only book club centered around the fantasy genre, that started in 2015. This post was written by Paige (@moonst0rm on Twitter) on behalf of The Lit Coven. Paige is a founding member, witch, and graphic designer (moonstorm.design).

“What are you reading?” isn’t the always the easiest question to answer when asked by a non-bookish person, or a stranger, when you are deep into a fantasy world with its own magic system. Do you answer excitedly and start explaining everything that is going on? Do you try to explain what magic even is? Because honestly sometime it depends on the book. Personally, my answer in the past tended to be “A book”, “A mystery”, “It’s about witches”. Which would generally lead to someone making fun of me for just reading in general (wut?!). Let’s not even get started on the whole “adults-reading-YA” debacle (which is ridiculous).

When you find people who happen to be reading the same magical book as you, I recommend holding on to them. That is just how The Lit Coven came to be.

In February 2015, While reading A Discovery of Witches by Deborah Harkness, I shared with a friend who I knew I could trust with my book interests because she had the same tastes. She knew of a few more people that love fantasy and this led to 4 of us creating a group chat to talk about the series. Our group chat was originally titled “Book Worms” until a few months later the idea for a name change to “Lit Coven” sparked and it stuck ever since. Then, we’d just go with the flow of whatever we felt like reading, but as we talked about our new book club online, others started gaining interest. We decided to plan books a bit in advance, create discussion questions for when everyone finished, and have an organized calendar for everyone to keep up with reading goals.

Within a year, The Lit Coven grew to 20 members and a single group chat was no longer feasible to hold everyone with the book discussion and side discussions going on. We then made the decision to migrate to the BAND app, where we could have a general feed and as many members and chat rooms as we wanted. BAND has been our home base since 2016.

Since then, our membership has grown to 68 members. There are generally only about 15-20 members active at a time, depending on time of year, the books being read, or when they can fit a book club into their life. We are firm believers in putting life first, so everyone is completely understanding if someone goes silent for awhile. A lot of our members reach out to each other via other social platforms and stay in touch when not participating in The Lit Coven activities, which to me is beautiful.

We created The Lit Coven to be a fun space to share our love for fantasy novels and it has evolved into a growing, caring community where people from around the world are connecting with each other and forming friendships, stemming from our favorite books.

Here’s a sneak peek at our 2019 TBR. Be sure to check out our website or social on October 31st, the witches new year, for the official release to see the full list!

Which Witchy book is a favorite of The Lit Coven?

39% The Wicked Deep by Shea Ernshaw

35% -All Souls Trilogy by Deborah Harkness 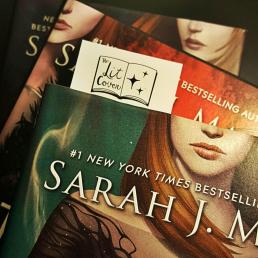 One thought on “Witch-y Wednesday: Guest Post: The Lit Coven”