*** Disclaimer: I received an ARC in exchange for a free and honest review. All opinions are my own. ***

“Fairytales lied all the time, she knew that. She’d experienced it too, much to her regret.” – Josie Jaffrey, The Silver Queen 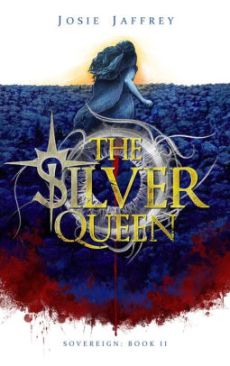 The Gilded King left us a new world in pieces. The Silver Queen shows that with rebellion comes sacrifice. If there’s a common theme throughout this sequel it’s that the stakes are higher. The lines are blurry and as my favorite show quotes again and again, “there are no good guys.”

The Blue is crumbling, the royals have lost control. After the events of The Gilded King very few humans survived. Claudia and Julia are at a loss for what to do so they hide out, sorting through the mess that was once their home. If there is one character I dislike it’s Claudia. Julia plans to find out what life in The Red is like, since her world is now as foreign as the outside. But Claudia still holds her back.

Once the dust clears Julia is left alone in the blue. Believing Lucas abandoned her once the fighting was done, she tries to pick up whatever pieces of her shattered life she can. But this wasn’t a fight, it was a battle to ignite the war. One that will change the blue and Julia’s world as they know it.

The humans have been taught fear, to live afraid of the red, afraid of those who were contaminated. But after the night that they’re island fell apart, Julia is beginning to question the truth. She wonders if the fairytales Lucas told her may hold some truth for humans, and instilled fear in the royals they were intended for.

I can’t give too much away without spoiling the twists and turns of this awesome sequel. But I can tell you about the characters and for me how much they grew.

Julia was my favorite in The Gilded King, and continued to be my favorite in the sequel as well. She soared past her flaws with every chapter of this book and grew into an even stronger, more confident, young woman who realizes that she doesn’t have to belong to anyone. She doesn’t have to spend her life as a server, as a human who’s only worth her blood to the royals. She can be her own master and there is a life for her other than serving.

And Lucas. I kept waiting for him to appear, to prove me and Julia wrong in thinking he just decided to abandon her after saving her more than once. She wears his silver and well, he has good reason to run. To hesitate over the fate of a life with the girl who was supposed to be nothing more than his attendant, his food if you will. Lucas’s story merged with Cam and his band of rebels, bringing the characters together and connecting dots we didn’t know needed connected.

The most shocking of this all is the fact that I grew to enjoy Cam and his chapters. Cam is more complex in this story. He’s afraid of his feelings for Felix, afraid of Felix. That’s not something you see normally with vampires; their vulnerability. Because their budding romance is no longer at that stage of infatuation. Cam realizes they don’t know each other, he starts to question if he can trust him the way he originally thought he could.

Felix is a mystery, one unraveled throughout the story. When you find out his motive, his own secret, everything makes sense as to why he’s with Cam and why he wants so badly for Cam to be with him.

“Silvering. The magic that happened when the Nobles fell in love. She’d thought it was just a fairytale, and Lucas hadn’t been so sure himself, but he’d still told her the story of when the King had fallen in love with the Queen.”

Another refreshing aspect of this story is that even the royals aren’t prepared for what they unleash into their world. Their rebellion was bringing back their long lost queen, to have the world in which they remembered, those who are hundreds of years old. But they didn’t realize what they were bargaining for. They learn, along with us, that sometimes stories are better left written than brought to life.

When I start a series, I usually always like the first book best. It’s the setting up of a world, getting to know characters. Most first books are character oriented and that’s my favorite aspect of any series, especially fantasy. But with this series I have to say I enjoyed The Silver Queen even more than I enjoyed The Gilded King.

Maybe I’m a sucker for slow burns (okay yes I admit it I am) but even with Lucas and Julia separated I was on the edge of my seat. Cheering for Julia to grow, cheering for Cam to admit his feelings for Felix, waiting for Lucas to find Julia again. We learned what it means to be contaminated and why the royals essentially created the island of Blue to keep from tainting their supply of blood.

The stakes were so much higher and so much more character driven. This sequel didn’t let me down. This sequel reveals so many secrets, so many twists and turns, but still leaves doors open for a third. I for one cannot wait to see where all the characters ends up in the world that is nothing like the one we started with.

The Silver Queen comes out tomorrow!

One thought on “Guest Review: The Silver Queen”

Leave a Reply to Kelsey @ There's Something About KM Cancel reply