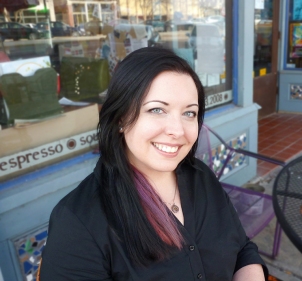 Jill Baguchinsky remembers staring down the bones of prehistoric beasts during a trip to the American Museum of Natural History in New York City when she was six. That visit spurred a lifelong fondness for paleontology that helped inspire the subject matter of Mammoth.

Born in New York and raised in Florida, Jill attended Florida Gulf Coast University and goofed off at Walt Disney World as often as possible. She spent several years in the Augusta, Georgia area, where she was forgiven for being a Yankee, but right now she’s back in southwestern Florida, living with a couple of strange cats. If she’s not writing, she’s probably dodging hurricanes, fangirling on Twitter, pretending she can knit, or teaching others how to pronounce her last name. (But let’s not kid ourselves. She’s most likely writing.) She’s known for quoting Ghostbusters, Bob’s Burgers, and Jurassic Park at inappropriate moments, and for being that person at a party who spends the whole evening befriending the host’s dog.

Jill’s first novel, Spookygirl: Paranormal Investigator, won the 2011 Amazon Breakthrough Novel Award. Although spooky stories will always have a place in her heart, Jill knows from experience that just being a teen—having to figure out who you are and who you want to be—can be scary enough without the addition of ghosts and ghouls.

One afternoon in 2013, I texted my friend Dava about some potential book ideas. I had a few characters in mind—I always start with characters—but I needed somewhere to put them. It was probably Dava who suggested a dig site—she’s the education coordinator at the Waco Mammoth National Monument [LINK: https://www.nps.gov/waco/index.htm], and researching a book set at a similar site was a perfect excuse for me to visit her in Texas. While I’ve always loved paleontology, my knowledge of it was surface-level, and most of the pop-culture paleo references I was familiar with got the details wrong. I’d need to learn a lot to nail the story’s science content.

Luckily, I had Dava.

Jill: Here we are touring a private replica collection.

That book idea would eventually become Mammoth (available November 6 from Turner Publishing [LINK: https://www.turnerpublishing.com/books/detail/mammoth]. When those initial characters didn’t cooperate, I replaced them with plus-size fashion blogger and paleontology geek Natalie Page, along with a supporting cast of friends, frenemies, paleontologists, and a few cute fellas who all come together for a summer intern program at the fictional Central Texas Mammoth Site.

That December, I flew out for a long weekend in Waco and Austin, where Dava worked her connections and provided me with a paleo research trip that was nothing short of . . . DINOmite. 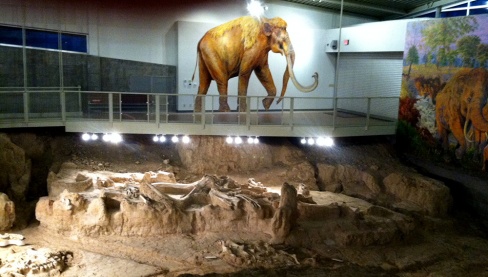 Waco Mammoth is one of a handful of in situ dig sites in the United States. This means that some of the fossils are left partially excavated for visitors to view in the ground. To protect those fossils, the bone bed is inside a temperature-controlled shelter with elevated walkways that let guests view the bones without accidentally trampling any. I recreated the shelter for Mammoth’s dig site.

Jill: In the sandbox with a few of my excavation tools.

In Waco Mammoth’s practice “sandbox,” I learned the painstaking basics of digging, and Dava also showed me how to prospect for fossils in the surrounding woods. When Natalie creates a pedestal around a fossil or picks her way down a dry riverbed, scanning for any hint of bone in the cracked soil . . . I experienced every detail. (At least I wasn’t withering in the Texas heat like Natalie and her fellow interns!)

Dava wasn’t done there. We also went behind the scenes at Waco’s Cameron Park Zoo to meet an absolutely delightful pair of rescued elephants, an experience that sparked one of my favorite scenes in Mammoth.

We also toured the Jackson School of Geosciences Vertebrate Paleontology Lab in Austin and several bone storage sites, all of which influenced the book’s settings. Dava introduced me to paleontologists who were happy to answer my questions and tell me stories that illustrated just how wild the field can be. 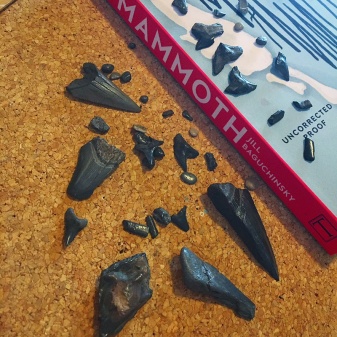 Jill: Some screen-picking treasures from my practice gravel.

Dava even taught me the love-it-or-hate-it task of screen picking – separating bits of bone and other fossil fragments from gravel collected at dig sites. We spent a cozy afternoon in her living room sorting tiny fossils, watching movies, and playing with her cats. (There’s a hidden shout-out to Dava’s cats in Mammoth, by the way – Cody’s high school is named after them.)

Mammoth wouldn’t be the book that it is if it weren’t for Dava. In many ways, it’s as much her baby as it is mine. I’m grateful for every opportunity she arranged, and I’m so lucky to call her one of my closest friends.

I used to view book research as a lot of reading, perhaps emailing an expert or two with a few questions, and dancing around any small details of which I wasn’t sure. In truth, nothing compares to hands-on experience, and I packed every one of my Texas adventures into Mammoth.

MAMMOTH is out today! Have you gotten your copy yet?