**Though The Sound of Suffering is a sequel, it can be read as a standalone as the first chapter summarizes book one.** 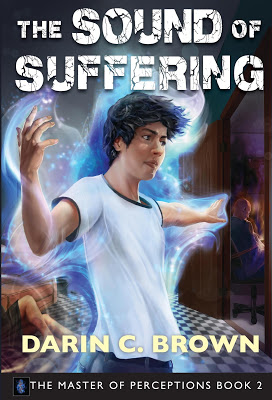 The Sound of Suffering (The Master of Perceptions #2)
By Darin C. Brown

Hunter Miller has a secret.

He can read and manipulate the auras that surround everyone.

Having used his talent to dethrone the reigning school bully, thirteen-year old Hunter finds himself thrust into a new quest after hearing screams in the aura of a teacher.  Unable to resist this powerful siren song, he investigates—despite warnings from his family and friends. It nearly costs him everything.

Upon discovering the truth, Hunter seeks assistance in his mission to defeat his formidable adversary. As the situation escalates, the adolescent hero ultimately realizes that despite the risks, he must fight this battle alone.

In this second installment of The Master of Perceptions series, can Hunter use his extraordinary powers to rescue an innocent woman without losing himself in the process?

There are two reasons harassers attack autistic individuals. First, they are perceived as weaker, and therefore an easier target. Second, it only takes a minimal amount of excess stimulation, maybe even something as simple as a single malevolent word or a touch, to achieve catastrophic results.

Instead of taking all the time to beat up a neurotypical, why not simply call an autistic person “weird” and make them cry?

Since bullying is mostly about power (like other forms of abuse), the less powerful a victim feels, the more satisfying it is for an aggressor.

Fortunately, there is a sea change in the culture, thanks in part to many organizations and support groups, such that these frequent behaviors are now recognized as harmful.

One of the main reasons I included so much information on these topics in my books is that the exposure helps promote awareness, which reduces immoral behavior. Knowledge is power, and I hope to expand the horizons of my readers in many ways, this being one of them.

The Sight of Demons (The Master of Perception #1)
Release Date: October 16th 2017
Summary:

Hunter Miller sees demons. The terrifying shadows engulf him and everyone he knows—yet nobody else notices their presence.

Hunter can’t escape them, so he sets out to understand them. Why do they follow him? What are they trying to tell him?

In this first installment of the Master of Perceptions series, pre-teen Hunter discovers that every sensation the demons produce—whether it be sight, sound, texture, flavor, or smell—has a different meaning. And that by breaking this code, he just might be able to harness their power.

DARIN C. BROWN spent the last twenty years saving lives as an emergency medicine physician in New Hampshire and Maine. His master’s degree in biomedical engineering and PhD in biophysics helped him conceptualize Hunter’s astounding capabilities. When he’s not writing, he directs Murder Mystery Dinner Theater, including the biannual shows on the Conway Scenic Railroad. In addition to his varied academic interests, he competes at the national level in master’s track. He currently resides in the White Mountains of New Hampshire with his wife, Dr. Sandra Brown, and their many pets.