About the book:
When Nadya prays to the gods, they listen, and magic flows through her veins. For nearly a century the Kalyazi have been locked in a deadly holy war with Tranavian heretics, and her power is the only thing that is a match for the enemy’s blood magic. But when the Travanian High Prince, and his army invade the monastery she is hiding in, instead of saving her people, Nadya is forced to flee the only home she’s ever known, leaving it in flames behind her, and vengeance in her heart.

As night falls, she chooses to defy her gods and forge a dangerous alliance with a pair of refugees and their Tranavian blood mage leader, a beautiful, broken boy who deserted his homeland after witnessing his blood cult commit unthinkable monstrosities. The plan? Assassinate the king and stop the war.

But when they discover a nefarious conspiracy that goes beyond their two countries, everything Nadya be

lieves is thrown into question, including her budding feelings for her new partner. Someone has been harvesting blood mages for a dark purpose, experimenting with combining Tranavian blood magic with the Kalyazi’s divine one. In order to save her people, Nadya must now decide whether to trust the High Prince – her country’s enemy – or the beautiful boy with powers that may ignite something far worse than the war they’re trying to end.

“Prepare for a snow frosted, blood drenched fairy tale where the monsters steal your heart and love ends up being the nightmare. Utterly absorbing.”

“Full of blood and monsters and magic—this book destroyed me and I adored it. Emily is a wicked storyteller, she’s not afraid to hurt her characters or her readers. If you’ve ever fallen in love with a villain you will fall hard for this book.”

Horz stole the stars and the heavens out from underneath Myesta’s control, and for that she has never forgiven him. For where can the moons rest if not the heavens?

“It’s certainly not my fault you chose a child who sleeps so deeply. If she dies it will very much be your fault, not mine.”

Startled by bickering gods was not Nadya’s preferred method of being woken up. She rolled to her feet in the dark, moving automatically. It took her eyes a few seconds to catch up with the rest of her body.

It wasn’t wise to tell the gods to shut up, but it was too late now. A feeling of amused disdain flowed through her, but neither of the gods spoke again. She realized it was Horz, the god of the heavens and the stars, who had woken her. He had a tendency to be obnoxious but generally left Nadya alone, as a rule.

Usually only a single god communed with their chosen cleric. There once had been a cleric named Kseniya Mirokhina who was gifted with unnatural marksmanship by Devonya, the goddess of the hunt. And Veceslav had chosen a cleric of his own, long ago, but their name was lost to history, and he refused to talk about them. The recorded histories never spoke of clerics who could hear more than one god. That Nadya communed with the entire pantheon was a rarity the priests who trained her could not explain.

There was a chance older, more primordial gods existed, ones that had long since given up watch of the world and left it in the care of the others. But no one knew for sure. Of the twenty known gods, however, carvings and paintings depicted their human forms, though no one knew what they actually looked like. No cleric throughout history had ever looked upon the faces of the gods. No saint, nor priest.

Each had their own power and magic they could bestow upon Nadya, and while some were forthcoming, others were not. She had never spoken to the goddess of the moons, My- esta. She wasn’t even sure what manner of power the goddess would give, if she so chose.

And though she could commune with many gods, it was im- possible to forget just who had chosen her for this fate: Mar- zenya, the goddess of death and magic, who expected complete dedication.

Indistinct voices murmured in the dark. She and Anna had found a secluded place within a copse of thick pine trees to set up their tent, but it no longer felt safe. Nadya slid a voryen from underneath her bedroll and nudged Anna awake.

She moved to the mouth of the tent, grasping at her beads, a prayer already forming on her lips, smoky symbols trailing from her mouth. 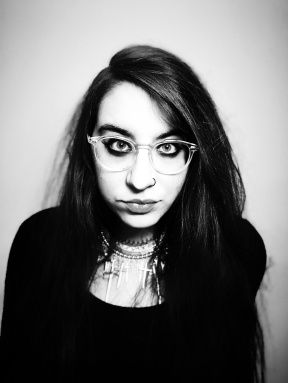 About the author:
EMILY A. DUNCAN works as a youth services librarian. She received a Master’s degree in library science from Kent State University, which mostly taught her how to find obscure Slavic folklore texts through interlibrary loan systems. When not reading or writing, she enjoys playing copious amounts of video games and dungeons and dragons. Wicked Saints is her first book. She lives in Ohio.

Click here to read my review for Wicked Saints!