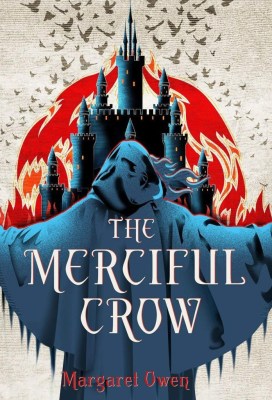 Synopsis:
A future chieftain
Fie abides by one rule: look after your own. Her Crow caste of undertakers and mercy-killers takes more abuse than coin, but when they’re called to collect royal dead, she’s hoping they’ll find the payout of a lifetime.
A fugitive prince
When Crown Prince Jasimir turns out to have faked his death, Fie’s ready to cut her losses—and perhaps his throat. But he offers a wager that she can’t refuse: protect him from a ruthless queen, and he’ll protect the Crows when he reigns.
A too-cunning bodyguard
Hawk warrior Tavin has always put Jas’s life before his, magically assuming the prince’s appearance and shadowing his every step. But what happens when Tavin begins to want something to call his own?
The Review

“One way or another, we always feed the crows.”

Welp… this isn’t going to be good.

Those were my initial thoughts the first few pages into Owen’s debut novel, and let me tell you…

Let’s start at the summary, shall we?

The Merciful Crow centers around three characters – Fie, Jasimir, and Tavin – all from separate “castes” and all with their own plans and motivations for the story. Fie is a future chieftain, taken in as a child when her mother was killed. Jasimir is the prince of the Phoenix and has faked his own death to overthrow his enemies. Lastly, Tavin is a Jasimir’s bodyguard, a Hawk, who has been ready to die for the prince since he was a child and trained to fight, to protect.

When all three are thrown together, thanks to Fie and a sworn Covenant oath, it is a race against the enemy to save Fie’s people and the prince.

Throughout I was swept away by the consistent action, character richness, setting, contemplation, and intensity Owen has crafted in this story. The history of the people is rich with myth and older ways, a more primeval way with of life with sacrifices, religious tones, and the looming threat of the plague. The style is a tad dark from descriptions of the dying to hints at past experiences the characters had each experienced.

I didn’t suffer from any lags in the narration or setbacks in anything that occurred. It may have taken me a bit longer to connect to the world but once I did, it really worked for me.

Out of all the characters, I did find that Jasimir was a bit stifled throughout his part, seemingly stuck in his role at times and not growing fully even at the end. He was the most difficult to connect with, after all he was raised as a prince and therefore wholly NOT connected to his people; though that becomes glaringly obvious immediately. The other characters worked beautiful both with the individuals’ story and their purpose – Fie is a kickass heroine that I didn’t realize I had been searching for and I adore Tavin from his bastardness to his desire for his own life, his own purpose.

They weren’t afraid to ask themselves, “What do I want?” And then they went for it.

Overall, I’m anxiously waiting for more of this world and what else Owen has in store for us.

I’m rooting for you Fie, Tavin, and Jasimir!

Born and raised at the end of the Oregon Trail, Margaret Owen spent her childhood haunting the halls of Powell’s Books. After earning her degree in Japanese, her love of espresso called her north to Seattle, where she worked in everything from thrift stores to presidential campaigns. The common thread between every job can be summed up as: lessons were learned.
She now spends her days wrestling disgruntled characters onto the page, and negotiating a long-term hostage situation with her two monstrous cats. (There is surprisingly little difference between the two.)
Social Media Links: