From the author of The Demon Race comes a YA dark fantasy series inspired by Inuit mythology.

In the heart of the frigid North, there lives a demon known as the Face Stealer. Eyes, nose, mouth—nothing and no one is safe. Once he returns to his lair, or wherever it is he dwells, no one ever sees those faces again.
When tragedy strikes, Apaay embarks on a perilous journey to find her sister’s face—yet becomes trapped in a labyrinth ruled by a sinister girl named Yuki. The girl offers Apaay a deal: find her sister’s face hidden within the labyrinth, and she will be set free. But the labyrinth, and those who inhabit it, is not as it seems. Especially Numiak: darkly beautiful, powerful, whose motives are not yet clear.
With time slipping, Apaay is determined to escape the deadly labyrinth with her sister’s face in hand. But in Yuki’s harsh world, Apaay will need all her strength to survive.
Yuki only plays the games she wins.
Book Links:

The following should not be construed as facts, but rather beliefs. There are variations of mythologies depending on the location (i.e. the Inuit who live in Greenland may have differing mythologies than those who live in Nunavut or Nunavik). Lastly, this is only information I found during my research. I’m not Inuit so please take my following research findings with a grain of salt. 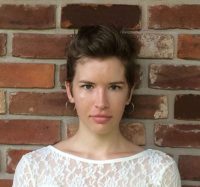 Alexandria Warwick is the #1 fan of Avatar: The Last Airbender. She is the author of The Demon Race and the upcoming North series.

Prize #1: Win (1) signed paperback copy of BELOW by Alexandria Warwick (US Only)