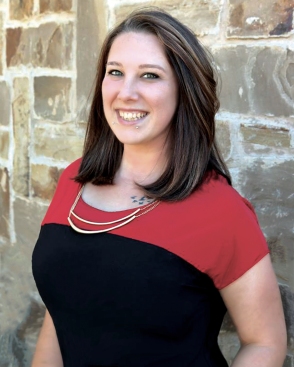 Valerie Roeseler is a #1 Amazon Bestselling Author of The Helio Trilogy. Her debut novel, Midnight Divine, is the first book in the trilogy. It was released in April of 2016 and was praised by Insite Magazine for its intense action and complex love triangle. Many others have compared the trilogy to the movies Constantine and Lara Croft: Tomb Raider rolled into one universe.

Valerie has the determination of a queen bee. When left to her own devices, she tends to forget that sleep is a necessity. She began writing as a child, creating fantastical stories with villainous animals on her toy typewriter. In her teenage years, her poetry writing was kept a secret before she wrote music, transforming them into lyrics. Her early inspirations came from her obsession with Greek and Egyptian mythology, as well as British literature from the Neoclassical period. Born in Austin, she is a native of the great state of Texas, raised in the outskirts of Houston. She is an enthusiast of art, music, tattoos, coffee, and wine. When not writing, she is an Executive Creative Art Director/CEO of Eden Elements Publishing. She has over two decades of playing guitar, which led to writing music for personal pleasure. She has five tattoos, each with their own significant stories behind them. Being a mother of two, if coffee had not been invented, the world would stop spinning. After a long day of chasing deadlines and toddlers, a nice glass of fine wine helps relax her creative mind.

How did you first get attached to writing paranormal stories?

a) Even as a child, the supernatural world fascinated me. I have always loved the idea there could be more in the world we don’t perceive, hidden behind a veil of secrecy. Do I believe in the paranormal and things I write about? To an extent, yes. I believe anything is possible.

What do you struggle with as a writer to overcome based on current societal biases when it comes to books and book content?

a) The Helio Trilogy is based on Christian beliefs of a Heaven, Hell, Fallen Angels, the Apocalypse, and the constant war between good and evil. Though these concepts were expounded fanatically in The Helio Trilogy, I wanted to remain respectful of other cultures and beliefs, just as I do in my personal life. Not once are the words ‘Heaven’ or ‘Hell’ used. Instead, they are referred to as Paradise (a common idea of what Heaven should be) and Sheol (the word used in the Hebrew bible that represents Hell). I didn’t want the focus to be on religion. The Helio Trilogy is not about religion in any way, shape or form. It’s about the personal struggle to be the perfect being society expects you to be and accepting the fact everyone is fallible. It’s about embracing your mistakes and flaws and being proud of who you are, because that’s what makes each of us the amazing beings we are. That’s why the tagline for the third book in the trilogy, Vermilion Horizon, is, “True Beauty and Strength Come from Scars of Darkness.” It is not until a being can embrace their imperfections and downfalls will they be able to conquer their journey.

How do you spin the trope of light vs dark in your stories?

a) This is one of the reasons I wrote The Helio Trilogy! I read a lot of Young and New Adult Urban Fantasies. While I loved many of them, I felt I hadn’t found the one book I was looking for that would connect with my soul. When I began writing the first book in the trilogy, Midnight Divine, it truly clicked in my mind what had been missing. I made it my mission to settle my soul with The Helio Trilogy. The key to the story was to write characters that not only were lovable, but relatable. Too many stories these days clearly define whether their characters are good or evil. Most of the time, the main character, who is always the hero/heroine of the story is too good. We love them…but they’re not relatable. They are not realistic.

The main character of The Helio Trilogy, Ivy Harris, is not your typical heroine. She is not sweet or righteous or so perfect it makes you want to puke. That is what people love about her. She curses, drinks, struggles with right and wrong, and has a temper to be reckoned with. On the other hand, she is compassionate, loving, loyal, protective, and genuinely sympathetic. Don’t get me wrong, she’s not always tough. She has fears, heartache, self-doubt, and overwhelming indecision. But Ivy Harris is the perfect balance of flawless imperfection. She struggles with darkness. She struggles with light. The best thing about her is she learns to balance both and creates a cohesive relationship with others who struggle with one or the other.

The point is, darkness and light are not two completely ends of a spectrum. There is a gray area. It is where we accept the darkness and the light within us and utilize it to become something greater than what is expected of us.

What was your favorite part about writing The Helio Trilogy and later companion short stories that come out this year?

a) The research that went into creating The Helio World was quite the feat. I took past and present myths and gave them their own spin that connected so well, it is logically believable. I also did a lot of research for the action scenes. My husband thought I was insane the first time I asked him if I could try a hand-to-hand combat move on him to see if it was being conveyed understandably in my writing. With the companion short stories, I loved being able to give my readers the backstories of the main characters while also providing a sequel that gives the sense of completion. It was bittersweet to write the last words of Ashes of Paradise, yet it left me able to breathe, knowing The Helio World is at peace, resting for the next adventure.

I have to ask… are there any villainous animal characters in your current trilogy that reflect on your stories you wrote as a child?

a) It is so funny you ask that! Nobody has thought to ask me this before. Yes, there is a villainous animal character in The Helio Trilogy that reflects on stories I wrote as a child. When I was a child, I was obsessed with The Neverending Story. Gmork is the evil, black dog in that movie. I feared that dog more than ‘The Nothing’ when I was a kid. I wrote about overpowering him when I was a kid. In The Helio Trilogy, there is a hellhound named Sasha. She is based on Gmork.

a) The Helio Trilogy is an epic story with many characters who have a past connection of how they ended up together. The companion novel, Ashes of Paradise: A Novel in Stories (The Helio Chronicles), gives the backstories of those characters while also answering a mysterious event from the end of the trilogy. It should not be read before the trilogy as it would ruin so many things for the reader. The thing I love the most about Ashes of Paradise is the way it connects with The Helio Trilogy in a full circle.
I do not plan on continuing stories based in The Helio World. Though, it is not an impossibility. I purposefully gave Ashes of Paradise the series titleThe Helio Chronicles for two reasons. One, being it is a chronicle of events from many of the characters lives. And two, because it leaves it open for me to write more of The Helio World if the time ever arises. For now, I am focusing on the release of Ashes of Paradise. I am also in the planning stages of a new series. If you want to stay up to date, you can join the Facebook group “Team Roeseler”. Team Roeseler members are my VIPs. Before anyone else, they know about events and giveaways, see teasers and excerpts, and have the opportunity to beta read material. They hear news and updates first.

The Helio Trilogy (Volumes 1-3) are available in a single eBook on Amazon Kindle and is free if you have a Kindle Unlimited membership.

Ashes of Paradise: A Novel in Stories (The Helio Chronicles) releases on July 6, 2018.