Angela is a stay at home mom who just happens to be a psychic medium. Join Angela, her dead mother Fran, and her best friend, Mel as they help Atlanta are detective Aaron Banner solve crimes and cross over spirits in this women’s sleuth mystery. 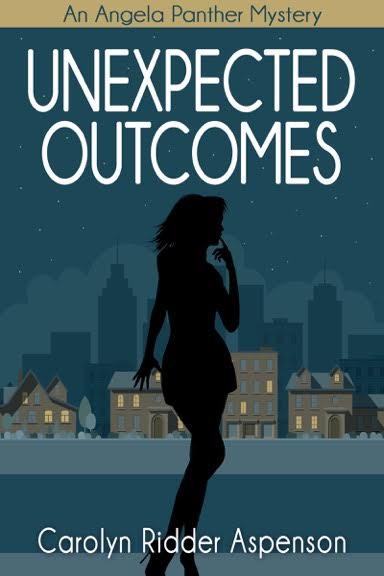 LIES, SECRETS AND THE ULTIMATE BETRAYAL.

When a frantic 911 call stumps a suburban Atlanta police department, psychic medium Angela Panther is asked to help. Without a body or a ransom note, the cops question whether there’s even a crime, but Angela’s certain the woman’s no longer among the living.

On the outside, the woman’s family seems run of the mill, but Angela’s sixth sense tells her something different, she just has to find the evidence—and the victim’s remains, to prove it.

With the help of her best friend, Mel, and Fran, her celestial super sleuth mother, she sets out to find it and stumbles into a web of dark, dangerous family secrets worse than she ever imagined.

When a desperate spirit forces Angela to act on impulse, she makes one wrong move and lands right in the path of the killer. Alone, and begging for her life, Angela realizes she might not make it out alive.

This book is the 4th in the series but as with all the others, can be read as a stand-alone. 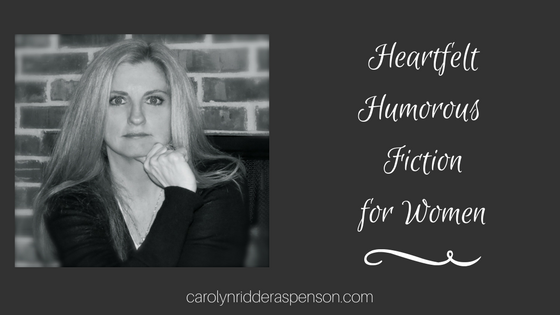 Carolyn Ridder Aspenson currently calls the Atlanta suburbs home, but can’t rule out her other two homes, Indianapolis and somewhere in the Chicago suburbs.
She is old enough to share her empty nest with her husband, two dogs and two cats, all of which she strongly obsesses over repeatedly noted on her Facebook and Instagram accounts, and is working on forgiving her kids for growing up and leaving the nest. When she is not writing, editing, playing with her animals or contemplating forgiving her kids, she is sitting at Starbucks listening in on people’s conversations and taking notes, because that stuff is great for book ideas. (You have officially been warned!)
On a more professional note, she is the bestselling author of the Angela Panther cozy mystery series featuring Unfinished Business An Angela Panther Mystery, Unbreakable Bonds An Angela Panther Mystery and Uncharted Territory An Angela Panther Mystery, The Christmas Elf, An Angela Panther Holiday Short, The Ghosts, An Angela Panther Holiday Short, The Inn At Laurel Creek, a contemporary romance novella, Santa’s Gift, a Cumming Christmas Novella and 8 To Lose The Weight, a lifestyle eating program. Carolyn is also a freelance writer and editor with Literati Editing. For more information, visit http://carolynridderaspenson.com

“I CAN’T BELIEVE I’m gonna die. Please, no. Why are you shooting at us?”

I pulled the trigger and watched as the bullet raced through the air, smacking my best friend in the center of her chest.

I bolted upright; sweat dripping from my forehead, tears streaming down my cheeks, my heart beating faster than ever. I’d just dreamed I’d shot my best friend, my best friend. I mumbled under my breath. It’s just a dream, just a dream.

My husband Jake rolled over and rubbed my leg. “You okay, babe?”

I lay down and snuggled into him. “Another nightmare. I shot Mel.”

He wrapped his arms around me and squeezed. “We both know that would never happen. It was just a dream. Don’t let it upset you.”

I glanced at the clock. It was four AM, and I knew I wouldn’t fall back asleep, so I kissed Jake and got up for the day, resigned to the fact that I’d be exhausted before nightfall. I shuffled to the bathroom, closed the double doors, and flipped on the light. My eyes sunk like anchors in the blue and black pits swelling below them. Sleep eluded me most nights, and the nights I did catch a few z’s contained restless and fitful slumber, and it showed.

Downstairs, I made a fresh pot of coffee, and while waiting for it to finish, replayed the dream in my head. Nothing was clear except Mel. Fuzzy images of gravel and trees flashed briefly in my head, but their pictures remained too blurred and indistinct to identify with any clarity. My gift allowed me to communicate with the dead, not predict the future, and half of me thought the dream meant nothing. The other half though, threw red flags up all over the kitchen, practically screaming “Danger, Will Robinson”, like that old TV show. That half knew the Universe didn’t have a rulebook, and the fear of what it could mean crushed my heart like a ton of bricks. Six months ago I couldn’t feel what a ghost felt, but that had changed, so I knew endless possibilities existed, and that scared the bejesus out of me. I powered on my phone and pounded out a text to Mel.

It didn’t take long for her to respond. That’s how best friends worked. No matter what time it was, they were there when we needed them. “Wow, me too. It was so strange. I shot you.”

My heart raced into the anaerobic zone. I snatched my keys from the key box, slipped on my tennis shoes and bolted out the door and into my car in the garage. Both of us having the same dream wasn’t a coincidence. It meant something, and I didn’t need my spidey sense to tell me that.

I sped fifteen miles over the speed limit and made it to Mel’s house in record time. I killed the lights as I drove into her driveway and sent her a text. “Don’t freak when the garage door opens; it’s just me.” I’d had the code for years, just like she had mine because best friends shared that kind of stuff.

She met me in her kitchen, her long black hair pulled into a bun, and her feet snuggled into the fuzzy teddy bear slippers I’d bought her for Christmas last year. “It’s a little early for coffee, doncha think?”

I couldn’t speak. I just flung myself at her and wrapped my arms around her neck, holding on for dear life.

“I…I…you’re cutting off my oxygen.”

I softened my vice-hold but didn’t let go.

She broke free and raised her eyebrows my direction. “I’m sorry I killed you, but it was just a dream.” She shuffled over to her coffee maker and grabbed the pot. “Flavored or regular?” Clearly, ending my life didn’t impact her as much as her death did me. Then again, she didn’t know I’d bumped her off, too. The double sucker punch would surely knock her out, or at least I’d hoped it would.

I sat at the counter feeling a bit embarrassed for freaking out, but based on the changes in my life over the past few years, I was justified. “Either is fine.”

She rinsed the pot and asked again why I’d showed up at such an ungodly hour.

I knew Mel’s dream increased the probability of the Universe giving me a message I didn’t want to hear. Was Mel going to die? Was I? If one of us did have a death date sooner rather than later, would it be by the respective best friend? I couldn’t imagine any situation where I’d kill my best friend, but then again, a few years ago I couldn’t imagine talking to dead people, and that was a daily occurrence.

She placed a fresh cup of coffee next to me. I held it to my nose and took in the spicy, fruity smell, stalling to answer her question.

“So, you gonna spill it, or are we gonna sit here and pretend you’re just here to hang out at butt-early o’clock?”

“Why? You do something that would cause me to carry through?” She giggled, but I didn’t think it was funny, and my expression told her so. Her smile flipped over. “Come on, what’s going on?”

“I dreamed I killed you, too.”

She dropped into the seat next to me. “Well, that’s alarming.”

“I shot you twice in the chest. Some place outside, but I’m not sure where. It was a quick dream.”

Enter to win…. the 7 ebooks in the series!