What if someone tried to fake the rapture?

When hundreds of thousands of people disappear in the middle of the night, including sixteen-year-old Gwen’s best friend Lana, no one knows why. Some believe they were taken in the rapture, while others are convinced that it can’t be true. Doomsday prophecies abound that involve horrifying tales of plague, famine, earthquakes, and more.

At first, Gwen doesn’t know what to think. While she is busy mourning Lana, many people around her are getting taken in by the cultish True Believers Temple, including Gwen’s dad and her friend Mindy. It is clear that more and more people are going to be pressured to join this church, as it starts taking over the media and the government, gaining zealous followers all over the world.

Then Gwen starts receiving emails from Lana. She claims to have been forced into hiding with thousands of others in an underground compound. Gwen is convinced the emails are real and the only other person who also believes her is Isaiah, her moody crush. Together they resolve to find out where everyone is hiding and help set Lana free.

Words from the Author

Where I got the idea for The Departed.

A lot of people have asked me where I got the idea for a book about a fake rapture. I have always been fascinated by the idea of the rapture, and I’ve met a lot of people over the years, who seemed to not only believe it was going to happen soon, but also wanted it to happen as soon as possible. I even had a friend in high school tell me there was no point in recycling, because she was expecting to be brought up to heaven very soon so there was no need to preserve or reuse our natural resources. That was twenty years ago . . .

I began to imagine what it would be like for someone to fake the rapture and how they could convince so many others to go along with them. I always saw this story with teenagers being the main characters, because I still read a lot of YA and I feel like this type of narrative made the most sense for me as a young adult novel. I’ve always considered it a dystopia, but I know it’s not necessarily one in the traditional sense.

This story germinated for years until I finally sat down and made myself write it. When I began figuring out how the entire conspiracy worked, I realized there were actually several layers to unveil for the reader about who was behind it and what their motivations were. At that point, I knew this story was a series and there were a lot of crazy things that Gwen, Isaiah, Mindy, and the rest of my characters could discover on their journeys for the truth. 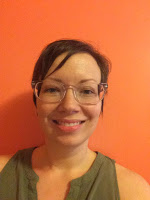 Kristy Cooper found herself often contemplating unusual what-if scenarios and knew it was time to start writing them down. She worked as a librarian for years and is now busy raising small children and writing YA novels. Stay up to date with her books at kristycooper.com.

Check out the others on this tour!

One thought on “The Departed Promo”