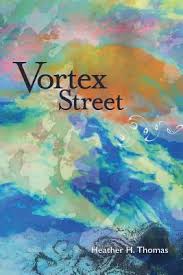 Kailey Tedesco is the author of She Used to be on a Milk Carton (April Gloaming Publishing), Lizzie, Speak (White Stag Publishing), and the forthcoming collection, FOREVERHAUS. She is a senior editor for Luna Luna Magazine. You can find her work featured in Electric Literature, Black Warrior Review, Fairy Tale Review, and more.

Let Yourself be Swept into Heather H. Thomas’ Vortex Street

In a labyrinth, a vortex represents a choice. You’re in the center of a maze. You’re spiraling. You’re confused. All passageways say “exit”, but you know it’s not that easy. You must choose or else find yourself back where you started.

In Heather H. Thomas’ Vortex Street (FutureCycle Press), the reader is guided on a temporal journey through memory and witness where all paths lead back to the starting point, and the starting point is in a constant state of manifesting new paths to follow. All that are lost are eventually found, but the found will then continue to re-seek lostness dutifully. It is a collection that begs the reader to question the comfort of nostalgia so that the entirety of the self might be viewed objectively. In the ekphrastic poem “Voyage” inspired by Magritte’s “L’Evidence Eternelle”, Thomas writes:

As though parts of a body can suggest

what is missing, a child and her father

sing open a spot where the parts

The speaker of these poems is acutely aware of & influenced byher ancestors, both biological and spiritual. She conjures apologies and confessions from deceased or missing relatives in order to create closure so as to continue the path of understanding the self in relation to those who surround her. In “Letter My Father Never Sent Me”, the poet writes: “All those years you were just across the bridge. You had a new / father, new name. Why interfere? How could I, having failed to give /your mother a cent” and later, “Look, there’s a war going / on. People getting killed by the hundred thousand, guys sweating it out / learning life, death, and God in the air…”

By adopting the persona of an absent father, the speaker exercises an act of empathy crucial to this collection as a whole. By removing the self from the self, the speaker briefly rectifies her relationship with her father by examining the possible trauma that may have led to him causing further pain. This insistence on interconnectedness is vital & woven into every poem. Further, the poet interrogates the way place and upbringing inform our ideas of family. In the poem “Pagoda”, Thomas writes:

and my parents split. The closed door where

a poem takes the place of a mountain.

Closed door that takes the place of my father.

Through masterful language & tone, the poem makes a direct allusion to the poet Wallace Stevens and then immediately ties this allusion to the speaker’s own familial background. Throughout the book and in the Notes section, it becomes clear that the poet briefly lived in the home where Stevens was born in Reading, PA.  Later, this same poem reads:

I’m attached to my father because

his body was conjoined with my mother’s

before he was erased and

When he died, we did not separate.

I am not this thing a hungry ghost

with my neck as thin as a needle’s eye

and my stomach the size of a mountain —

This home is then a place atavism for the speaker. The inhabitants behind the closed door of the house, in both past and present, inform her identity and her desire to understand the voices and ghosts of those who surround her as a way to insist that she is not a ghost herself. She is working on her own story through the stories of others. Here, to understand the past’s mingling with the present is to understand the significance of life.

And while this childhood home certainly holds significance, this collection also rejects the idea of home as a place. Instead, home becomes the practice of conjuring memory and bearing witness to all other existence. Vortex Street is also not a home, but a place to be visited or passed through. It seems to exist along the river of the speaker’s geographical upbringing, but it is also a place where the speaker “follow[s] the map / of your voice / divergent, convergent” and finds that those who inhabit Vortex Street have “defeated old ghosts / and stayed.”

These words come from one of six postcards from Vortex Street, each dated with no year. However, this particular postcard shares a date with a previous one: 4/13. The first of these April 13th poems reads: “The trees are for you, / the whole of their wideness // blooming magnolia.” In this haiku, the poet communicates succinct images suggesting growth and spring. Yet, on the later April 13th postcard, perhaps from the same day or perhaps from years before or after, there is a lack of trees — only darkness and ghosts. Something has been lost and so it becomes imperative to “[find] a flashlight and [go] / looking for [ghosts] again.”

Ghosts haunt the pages of Thomas’s collection. Sometimes they are guiding and sometimes they cautionary. In the poem “Oblivion”, the poet writes:

Stone faces in my house tell their harrowing stories:

I got out but I lost my wife.

The men forced my son to watch. I never saw him again.

I crawled from a ravine where they’d thrown a pile of bodies.

Here, survivors of war and immeasurable pain speak of their trauma. They testify as the speaker listens, sometimes recording their stories in her “reporter’s notebook.” All of these stories become woven into the walls of the many homes the speaker inhabits and into the very infrastructure of the poems the writer records. The aforementioned poem continues: “Inside, the living / room brims with fish and fresh water. Everyone is coming in to eat, / drink, live on in the space after I disappear.”

A book of knowing and clairvoyance, Vortex Street is a testament to the existence of the living and the dead. It is a collection about survival through an examination of those who survive to tell our stories. It is a reminder that even behind closed doors, there are others witnessing our stories, recording them, validating our existence through understanding, even if that understanding is “Brief as a negative / held to the light.”

Thomas is a phenomenal poet, and so naturally Vortex Streets is a phenomenal collection that blends varying structures and language that is reflective of both modernist and contemporary sensibilities. Through a voice uniquely her own, Thomas weaves each striking image into the reader’s body & bones so that all who engage with this work are swept into the vortex, joining the chorus of prophetic and reflective voices that echo in this collection.

Heather H. Thomas is the author of six poetry collections, including Practicing Amnesia, twice a finalist in the National Poetry Series; Resurrection Papers; and Blue Ruby. Her honors include a Rita Dove Poetry Prize and a Gertrude Stein Award in Innovative American Poetry. Thomas’s poems have been translated into seven languages, including Arabic, Hebrew, Lithuanian, and Spanish. An award-winning teacher, Thomas is devoted to sharing the creative and healing power of poetry. She lives in Reading, Pennsylvania.

Enter to win a Booglie Adventure Swag Pack! Details and rules on the Itchy Pants book page.October 31, 2021
7 days to go.